A woman of firsts, Healy didn't worry about being popular. 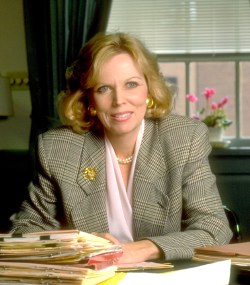 Wherever she served, Bernadine Healy (HS; fellow; faculty, medicine, cardiology, pathology, 1971-84) made waves. A respected, innovative, and sometimes controversial cardiovascular researcher, she became the first woman to serve as an associate dean of the School of Medicine, overseeing postdoctoral programs and faculty development; the first female head of the National Institutes of Health, which she led from 1991 to 1993; president of the American Heart Association from 1998 to 1999; then the first woman to be named president of the American Red Cross, which she headed from 1999 to 2001.

A strong advocate for women’s health, she launched the NIH’s Women’s Health Initiative, a $500 million, 10-year study of diseases that affect middle-aged and elderly women, and was relentless in her battle against the generally accepted but misguided belief that heart attacks were a problem for men, not women—when, in fact, heart disease is the leading killer of American women.

Healy wrote in The New England Journal of Medicine: “The problem is to convince both the lay and medical sectors that coronary heart disease is also a women’s disease, not a man’s disease in disguise.” She told the press: “I am willing to go out on a limb, shake the tree, and even take a few bruises. I’m not particularly concerned about being popular.”

Healy died on Aug. 6 at her home in Gates Mills, Ohio, of a recurrence of brain cancer, which she initially had battled in the late 1990s.  She was 67.

In both her NIH and Red Cross posts, Healy’s outspoken, often tough administrative style raised hackles and led to her forced resignations. As one Red Cross official later told The New York Times, “We hired a change agent for a culture resistant to change.” Healy later told an NIH biographer that resistance to change was something she eagerly combated. “Professionally, I am proud that I never compromised my core beliefs, never wobbled on what I believed to be the right path, and had the strength to endure both.”

A 1970 cum laude graduate of the Harvard Medical School, where she was one of 10 women in a class of 120, Healy completed her internship and residency at Hopkins, then spent two years at the National Heart, Lung and Blood Institute at the NIH before returning to Hopkins in 1976. She left in 1984 when President Ronald Reagan appointed her deputy director of the White House Office of Science and Policy. A year later, she became head of the Research Institute at the Cleveland Clinic Foundation, where she remained until President George H.W. Bush appointed her head of the NIH. She later served as dean of Ohio State University’s College of Medicine and Public Health and as a professor of medicine there from 1995 to 1999.

Healy also was a health commentator for CBS News and the Public Broadcasting System, as well as a columnist for U.S. News & World Report.