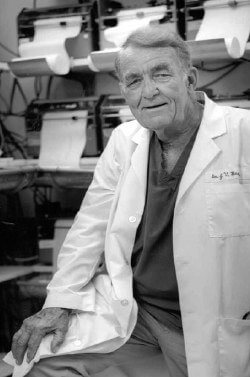 As director of NASA’s research laboratory, he oversaw the training of America’s first “astrochimps”—named Able, Baker, and Ham. On Jan. 31, 1961, Ham, a 3-foot-tall, 37-pound chimp, became the first primate in the United States to be rocketed into space. His 5,800 miles-per-hour, 414 suborbital-mile-flight, from which he emerged unharmed, paved the way for Alan Shepard to become the first American in space the following May, as well as for John H. Glenn’s historic orbital space flight in 1962.

An endlessly energetic and cheerfully optimistic researcher and teacher with a booming laugh and engaging personality, Brady died on July 29 at the age of 89. An internationally renowned behavioral pharmacologist and physiologist, he founded the School of Medicine’s Division of Behavioral Biology and its Behavioral Pharmacology Research Unit, both of which fostered highly creative research that had a profound impact on the treatment for substance abuse and addiction.

“His insight was that the addicted wouldn’t stay in treatment unless they were given blockers. He believed in and practiced what is now known as ‘stepped care,’” says J. Raymond DePaulo Jr., current director of the Department of Psychiatry and Behavioral Sciences. It was Brady, “a revered program-builder here for over 40 years,” DePaulo says, who suggested that “Behavioral Sciences” be added to the department’s name.

Brady’s research here “fundamentally changed how we treat addicted people,” says Paul McHugh, director of the Department of Psychiatry and Behavioral Sciences from 1975 to 2001.

An Army combat infantry platoon leader in Europe during World War II, Brady remained in the service while he obtained his pharmacology PhD in 1951 from the University of Chicago. He went on to work at the Walter Reed Army Institute of Research in Washington, D.C., where he led an interdisciplinary neuroscience research team that discovered that psychological stress could be far more damaging than physical stress.

After he retired from the Army as a colonel in 1970, Brady joined the Hopkins psychiatry faculty. He founded the nonprofit Institutes for Behavioral Resources (IBR) in 1960, then went on to purchase a six-story building on Baltimore’s Maryland Avenue in 2001 to house its corporate offices and research laboratories. It was home to a study of the effectiveness of a mobile methadone treatment unit in Baltimore, a program that has become a national model, and it still maintains an innovative substance abuse treatment program that serves more than 500 patients daily.

Two months before Brady died, the IBR celebrated its 50th anniversary by joining with the Department of Psychiatry and Behavioral Sciences to host a conference that celebrated his extraordinary accomplishments. He was able to attend “and enjoyed himself immensely,” DePaulo says. NAG