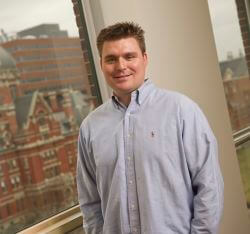 Trevor Ellison, shortly before heading to Cambridge.
Photo by Will Kirk/HomewoodPhoto.jhu.edu

When Bill and Melinda Gates donated $210 million to Great Britain’s Cambridge University in 2000, they wanted to expand educational horizons for young professionals who likely will make a real difference in the world.

The Gates’ gift—the largest single donation ever received by the 800-year-old university—established the Gates Cambridge Trust. It offers highly competitive graduate study and research awards for individuals whose intellectual and leadership abilities are combined with an intense desire to use their talents and knowledge to improve the lives of others.

Last spring, Ellison, 34, was one of just 29 Americans and 40 graduate students out of 800 applicants worldwide to receive a Gates Cambridge Scholarship. Now a third-year general surgery resident at Hopkins Hospital, he is using the funding to pursue an MBA at Cambridge’s Judge Business School. He plans to use his newfound knowledge to create an international medical relief rotation for Hopkins’ surgical residency program. He envisions tapping into Hopkins’ cadre of talented fourth- and fifth-year surgery residents, giving them a one- or two-month rotation at an international location where they can treat underserved people. His idea is patterned loosely on Doctors Without Borders, as well as a University of California, San Francisco partnership in South Africa and a surgery training program Hopkins had in both Oxford and Dublin until two years ago. It was dropped because of restrictions made on the number of hours residents may work each week.

“I think people who go overseas will fall in love with that kind of work, and want to do it for the rest of their life,” says Ellison, who also is pursuing a PhD in economic evaluation and policy at Hopkins’ Bloomberg School of Public Health.