Archives - When a Child's Heart Fails

When a Child's Heart Fails

After tummy pain turned out to be advanced cardiomyopathy, Hopkins doctors bridged little Ally to a new heart. 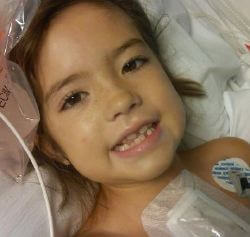 Thanks to a lifesaving "bridge" device, Ally Fowler was able to hold out for a new heart. After transplant (left), she made a quick recovery.
Photo by Keith Weller

The physician on Maryland’s Eastern Shore, Kevin Karpowicz, understood why Bev Fowler believed her young daughter might have appendicitis. After all, 7-year-old Ally had been complaining of worsening stomach pain, fever, and abdominal swelling. But the physician found the swelling was in the girl’s upper abdomen, close to the liver. He also became alarmed at Ally’s heart sounds, which displayed a prominent murmur. He ordered an abdominal scan and spotted an enlarged heart. Now it was hospital time.

When Johns Hopkins pediatric cardiologist Janet Scheel reviewed the girl’s case in Hopkins’ Emergency Department the following day, she found heart enlargement so pronounced that one of her colleagues exaggerated its dimensions to make his point. “It’s the size of a small European country,” he said.

After an echocardiogram, Scheel knew she was seeing an advanced case of cardiomyopathy. Four of the child’s heart valves were leaking, yielding an anemic fractional shortening of 7 percent—a pediatric measure roughly equivalent to an adult ejection fraction of 18. This was barely compatible with life. Ally’s heart showed “a very prominent gallop.” Her pulse was racing to compensate for the leaks. Her liver had swollen in response. Her skin was clammy.

Scheel made her concerns plain to the child’s worried parents. “Ally’s heart isn’t working very well,” she told them, explaining the details of cardiomyopathy and securing the girl’s admission.

Over the ensuing days, Scheel and other key members of Hopkins’ pediatric heart failure team launched a concerted campaign to amplify Allyson Fowler’s cardiac output while trying in vain to identify its seemingly viral source. But the child’s condition was relentless. Two weeks after her admission, Ally became a priority candidate for a heart transplant.

As the group followed Fowler’s progress, Scheel and her surgical colleague, pediatric cardiac surgeon Luca Vricella, became more alarmed with mounting evidence of her accelerating decline. “She was so weak,” Vricella explains, “she could not even open her eyes.” In his experience, says Vricella, children’s hearts initially compensate well in the face of heart failure. But when a child’s racing heart reaches its limit, he says, “they just go down like a stone in a lake.”

When an adult’s heart declines, says Vricella, physicians have a ready pipeline for cardiac assist devices that can extend their lives for transplant. But the cardiac device market is not so generous with little people, he says, partly because heart failure in children is such a rare occurrence.

There are only two companies who make assist devices suitable for children, says Vricella, and they’re both in Germany. But the bigger problem, he says, is that neither of their systems are approved by the FDA for use in the United States.

“So we have to get dispensation,” he says, by making a “compassionate use” appeal to the FDA and the key insurance groups. “I found my angel,” says Vricella, “in Dr. Kristen Nelson.” Nelson, a Hopkins pediatric critical care specialist, has mastered the appeals process so effectively that the chosen assist package arrived within three days of Vricella’s request.

Vricella installed the assist device on July 14, in a three-hour procedure that he described as “very smooth.” The device bought Allyson the extra window of time that she needed. Her new heart arrived on July 25. By August 2, she was back home in Kent County, after 42 days in the Hopkins ICU. Today, Ally is back in school, playing with her brother, and as active as ever.

The case of Allyson Fowler provides a useful window in the Hopkins pediatric heart team’s world, say Scheel and Vricella. The focus of the group’s 15 cardiologists and other specialists has produced excellent outcomes for an unusual range of cases ranging from infancy up through adult-stage patients suffering long-term consequences of childhood cardiac interventions.