Archives - What the Dead Teach

What the Dead Teach

In an annual memorial, students reflect on death, the human spirit, and other lessons from the anatomy lab. 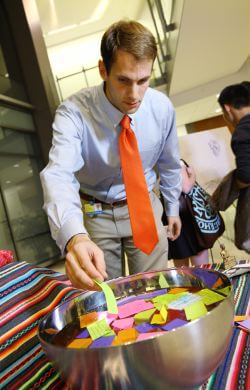 Medical student Jamie Schroeder adds his note of appreciation for the spirits of the anatomy class cadavers that he and his fellow classmates learned from.
Photo by Keith Weller

Before Jamie Schroeder met his first patient, he wondered how he would react. Would he be anxious? Uncertain? Instead, he felt a calming sense of purpose when he saw the body of the donor who would guide him through the intricacies of human anatomy.

“It’s such a gift that each donor presents you,” the first-year medical student says. “When you start at Hopkins, they say that this is your first patient, and that really resonated with me. I worked on an 83-year-old man who seemed to have had a good quality of life without too many degenerative diseases. And it was inspiring to see how bypass surgery had prolonged his life.”

More important, he says, the encounter helped him come to terms with the reality of entering a profession where death is always present.

Schroeder was one of a group of anatomy students who planned a ceremony to honor 26 anonymous donors whose bodies initiated them into the complex world of heart and nerve and sinew. Held Nov. 3 in the second floor atrium of the Armstrong Medical Education Building, the student-run event offered poetry readings, musical performances, and periods of silence for a gathering of roughly 90 students and faculty members.

Such tributes are becoming a school tradition. For the past seven years, Hopkins students have publicly acknowledged their debt to the cadavers they dissect—part of a national trend to pay respect to the men and women who donate their bodies to advance medical education.

Students work on cadavers that are identified only by a number, age, gender, race, and cause of death. It is a particularly intensive course of study—five hours a day, five days a week for nearly two months. As they learn about systems and regions of the human body, they may build bonds with their “patients” as well as their classmates, notes Ronn Wade, director of the Maryland State Anatomy Board. “By the end of their courses, students often feel deep appreciation for the cadaver-patients they work on,” he says.

This year’s ceremony loosely followed a Dia de los Muertos (Day of the Dead) theme, recognizing the Mexican tradition of commemorating dead family members and loved ones. A central table decorated with flowers and handmade tributes also became a repository for unspoken thoughts. Students dropped notes to donors into a silver bowl filled with water. Before long, multicolored messages covered the surface like a skin of rose petals.

Katie Washington, an MD/PhD student, shaped her gratitude into a poem, which she shared. Medical illustration student Kaitlin Lindsay performed “Ashokan Farewell,” the plaintive air for violin that served as the theme for Ken Burns’ documentary film series on the Civil War. She also contributed to a display of anatomical sketches that her fellow artists created by directly observing donors’ bodies.

Lorena Leite, a medical student from San Francisco, stole a day from her studies to bake traditional bread for the reception that followed the ceremony. With help from friends, she prepared pan de muertos, a sweet yeast bread, and atol de elote, a hot drink made from fresh corn, milk, sugar, cinnamon, and star anise. It is the custom, she says, to entice the spirits of the departed to attend the Dia de los Muertos ceremony by offering them such specialties. Only afterward may the living begin their feast.

For this occasion, the medical student fashioned her loaves in human form.

“The ceremony allowed me to honor the donors in a way that I like to honor people I care about,” Leite says. “When everything is moving so quickly for us, it is easy to just keep going forward with your life. This reminds me of what we’ve already received.”