Archives - The Man Who Depolarized Medicine

The Man Who Depolarized Medicine 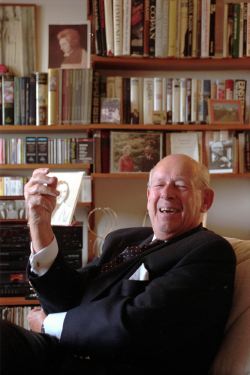 Neurosurgeon George Udvarhelyi was charming and erudite in five languages, four of which he spoke with the richly flavored accent of his native Hungary. Having seen the worst that humankind can do—he worked clandestinely in Nazi-occupied Budapest with Swedish diplomat Raoul Wallenberg to save thousands of Hungarian Jews from the Holocaust—he revered the best that humanity has to offer. While performing surgery, he would dazzle colleagues with his encyclopedic knowledge of art, music, literature, and medical history.

A professor emeritus of neurosurgery since 1984 but still a unique presence on the campus, Udvarhelyi died on June 22 of complications from a neck fracture. He was 90.

Udvarhelyi (pronounced OOD-ver-high-ee) believed that well-rounded physicians and medical students need to include the humanities in their educational curriculum. Along with the Homewood campus’s legendary humanities professor Richard Macksey, he founded the Hopkins medical school’s Office of Cultural Affairs in 1977. It was the first of its kind in an American medical school and brought to the East Baltimore campus such prominent writers, actors, musicians, artists and authors as Isaac Bashevis Singer, Aaron Copland, and Richard Leakey for lectures and performances.

“Because George was multidimensional, this program that he established helped depolarize medicine,” Dean Emeritus Richard S. Ross told The Sun.

A 1944 graduate of the University of Budapest’s medical school, Udvarhelyi worked in Argentina, Germany, and Scotland before arriving at Hopkins in 1955. Among his greatest contributions to Hopkins neurosurgery was his introduction in the late 1960s of a new French microsurgery technique that gained access to pituitary tumors at the base of the brain by going through a patient’s nose to remove them.