Longtime hospital administrator-turned-historian was a force to be reckoned with. 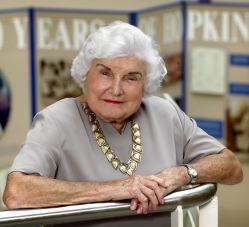 Retiring in any sense was not a word easily applied to Louise Cavagnaro.

“Cavi” or “Miss Cav” (as she was almost universally known) spent 32 years as an indefatigable, imaginative, and forceful Hopkins Hospital administrator and member of the School of Nursing faculty before retiring as an assistant vice president of Hopkins Hospital in 1985. Then 65, she immediately began volunteering at the Alan Mason Chesney Medical Archives, where she spent the past quarter century as “a wonderful mentor and devoted friend to archives staff and graduate students,” said head archivist Nancy McCall.

Cavagnaro, who died on June 24 at the age of 90, knew everyone at Hopkins Hospital for more than a half century, from presidents and School of Medicine deans to top physicians, nurses, and maintenance employees. When she decided to retire—again—earlier in 2010, she left the archives 11 cubic feet of personal papers, chronicling her career as a U.S. Army and public hospital nurse, hospital administrator, and guardian of the legacies of Hopkins Medicine and Nursing.

Cavagnaro began her career as an Army nurse during World War II, serving in Utah and then Great Britain, France, and Germany. In 1946, she joined the Atomic Bomb Casualty Commission as director of nursing in Hiroshima, Japan. Returning stateside in 1951, she obtained her master’s in hospital administration from Columbia University. She came to Hopkins in 1953 and held administrative positions in the Department of Surgery, medical affairs, and patient services. She also was active in establishing transplant organ procurement programs throughout Maryland and the Southeast. In addition, she was a strong advocate of Hopkins’ nursing program. When the School of Nursing was re-established in 1984, she was appointed a clinical associate on the faculty and became an honorary member of the nurses’ alumni association.

Cavagnaro was called the “mother superior” of an informal 10-person group of fellow administrators and faculty members known as The Lunch Bunch, which gathered regularly in the Hospital cafeteria and other venues. Its members knew the real scoop on Hospital policies, programs, and people. “There was no task too small or too large for her,” recalled Mabel Smith, an administrator for academic affairs in Pathology, a “Lunch Bunch” regular.

Cavagnaro was proudest of her role during the early 1950s and 1960s in ending the Hospital’s longstanding racial segregation. As one of the administrators who quietly told staff simply to stop the practice in their respective divisions, she helped ensure that desegregation was accomplished without fanfare or rancor. Initiated by then physician in chief A. McGehee “Mac” Harvey, the change was implemented simply because “it was the right thing to do,” she said.