Archives - The Business of Medicine

The Business of Medicine

For a growing number of physicians, an MBA is the ticket to providing better health care. 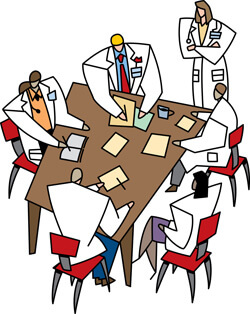 Sepsis, an overwhelming infection of the bloodstream, can kill a person if it’s not treated with antibiotics quickly enough. The national benchmark is within three hours of diagnosis. Before 2009, the emergency department at Franklin Square Hospital Center in Baltimore was meeting this benchmark for just 65 percent of sepsis patients.

Today, that figure is up to 93 percent, thanks to three physicians who work in Franklin Square’s ED. “We now have one of the lowest mortality rates for sepsis in the area,” says José Lopez. How did he and his colleagues achieve this? With their business degrees, of course.

Lopez, along with fellow ED physicians Eveline Hitti and Jonathan Hansen, were students in Hopkins’ MBA in Medical Services Management program when they tackled the issue in their clinical practice improvement course. With fellow classmate and Hopkins pharmacy director John Lewin, they gathered data from patient records, created charts, and identified which parts of their ER procedures were most time-consuming. Ultimately, by installing a refrigerated cabinet containing antibiotics to be dispensed by an ED nurse, they eliminated the time it takes to fax, fill, and retrieve a prescription from the hospital pharmacy. More than 90 percent of their sepsis patients now get their drugs on time. The results will appear in the Journal of Emergency Medicine.

This is exactly the sort of clinical problem that some business training can help solve, says Paul Gurny, who teaches the clinical practice improvement course. Other student teams have come up with solutions to correct outpatient surgery schedules that were chronically running behind, and inefficient (sometimes inaccurate) dispensing of blood clotting medication for patients before open-heart surgery. “Our goal is to really do something that improves health care,” Gurny says.

Administered jointly by the School of Medicine and the Johns Hopkins Carey Business School, the MBA program is a part-time program consisting of 54 credits that attracts physicians, as well as nurses, therapists, and other health care providers. Some are career changers, like Joel Braunstein, who was a physician completing a cardiovascular fellowship at Hopkins when he enrolled in the MBA program; he went on to found a life sciences company. And some graduates get promoted to administration. But the majority remain practicing medicine.

“I figured most people would be tired of dealing with Medicare paperwork and looking for a new career,” says Doug Hough, who launched Hopkins’ Business of Medicine certificate program in 1994 and oversaw the MBA program until two years ago. “But about 60 percent of our graduates stayed in the position they were in when they were getting the MBA. They told us that the program was helping them do their jobs better.”

Hopkins Medicine’s Bruce Perler had been a vascular surgeon for 18 years when he started the program. He figured that courses in accounting and finance would help in his leadership role as chief of the Division of Vascular Surgery—and he’s found that his training has indeed helped him deal with administration, which figures hugely in academic medicine: “Part of it is just learning the language, so that we can advocate for clinical care with the bean counters. We need to understand what those spreadsheets mean, and what they mean for what we do.”

Perler also credits the program with helping him (and a friend) become the editors of the Journal of Vascular Surgery. He’s convinced that his MBA courses upped the quality of their proposal to become editors. “It was like writing a business plan,” he says. “Whether we like it or not, health care is a business.”

And the reverse is also true: Business can also be health care. That’s why, when the Carey Business School launched its full-time Global MBA program this fall, planners included an experiential two-semester course called Discovery to Market, which begins this spring. Participants will work directly with researchers on real science or medical projects. Kieran Marr, a professor of medicine and oncology, is the liaison at the School of Medicine for the Global MBA program. “We tend to be focused on the clinical utility and scientific novelty [of a discovery],” she says. “In the meantime, what we have not done well is the business of getting it commercialized.”

Marr is currently identifying patents that have not yet gone through licensing. Global MBA students will work to identify the market potential for new technologies such as medical devices, biomarkers, and drugs, and help determine which businesses might be interested in the discovery.

“Health care reform makes all these things even more important,” says Hough. “Our graduates can be bridge builders who can talk to the ‘suits’ and administration. And they can translate the business side back to clinicians. It goes to both cultures.”