Archives - Means to an End

Means to an End

John '47 and Barbara Runyan hope their scholarship will allow deserving students to to graduate with less debt--and inspire others to consider a deferred charitable gift annuity. 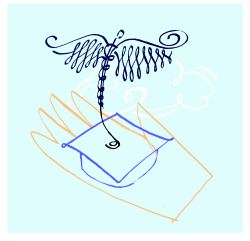 When John Runyan ’47, learned that more than 7,000 students applied to the Johns Hopkins School of Medicine last year, he was shocked. “I doubt I could even get in now,” he says with a chuckle, adding how grateful he is—even some six decades later—for the opportunity to attend Hopkins.

“Hopkins gives you an edge—and that opens up so many doors,” he says, speaking from experience. After receiving his medical degree and interning in Hopkins’ Department of Medicine, he went on to Albany Hospital in New York and then completed fellowships at Boston City Hospital and Harvard Medical School. In 1960, he joined the University of Tennessee faculty and has remained there since, developing the Endocrinology Division and serving in numerous academic and leadership capacities.

In gratitude to Johns Hopkins and to ensure that future generations of deserving medical students can attend the alma mater he holds dear, Runyan and his wife established The Barbara and John Runyan, M.D. Scholarship Fund through a deferred charitable gift annuity.

“We were children of the Depression, and we were both very lucky,” says Barbara Runyan. As an undergraduate at Washington and Lee, her husband enrolled in the Navy’s V-12 College Training Program, which also funded most of his medical school costs and eliminated the need for any scholarship support. She received a Ford Foundation scholarship for her studies at Goucher College. “Having that scholarship was one of the ways my Mom and Dad were able to give me the extras,” she says, noting that one of her most treasured “extras” was the private piano instruction she received at the Peabody Institute, now a division of Johns Hopkins University.

While both Runyans graduated from college free of debt, they recognize that more and more students are unable to afford a Hopkins education without borrowing significant sums of money. “Graduating debt-free made it possible for me to pursue a career in academic medicine, which is what I always wanted to do—and I’m very thankful for that,” says John Runyan.

The couple hopes their scholarship will make it possible for deserving students to take on less debt and graduate without the significant financial burden that can often derail professional ambitions. “I hope they will follow their dreams and desires and make a great contribution wherever they go,” says Runyan.

Establishing a scholarship—or a deferred charitable gift annuity—had never been in the Runyans’ long-range plans. They believed that such a philanthropic investment was well beyond their means. Like many alumni and friends of the School of Medicine, the Runyans were pleased to learn that a deferred charitable gift annuity could be personalized to fit their circumstances and financial goals, which prompted them to make use of a family asset to fund the annuity.

Years ago the couple had received stock as an inheritance from John Runyan’s father, and the value had appreciated significantly. The amount was sufficient to establish a scholarship, but John Runyan wanted to ensure that his wife’s future financial well-being was secure. The couple collaborated with Hopkins’ gift planning staff to create a charitable gift annuity that provides an income for life for Barbara Runyan. Deferring the income for five years increased the rate of return. The Runyans were also able to realize significant benefits, including a charitable income tax deduction, as well as some tax-free income. Payments from the annuity are guaranteed by Johns Hopkins, a definite plus in these uncertain times.

“The staff at Hopkins made it so easy for us … just a simple process,” John Runyan recalls. “We’re very satisfied with the outcome.” The couple receives a favorable rate of return that will not change over the life of the gift, and Barbara Runyan now receives a quarterly check. The annuity gives John Runyan peace of mind, knowing that the woman he married 61 years ago will have financial stability, no matter what the future may bring. As she sees it, a scholarship in the form of a charitable gift annuity is a win-win situation. “Truly, for those who make a gift in the form of an annuity, they’re not only helping others but helping themselves.”

To learn more about the ways you can make a gift to Johns Hopkins School of Medicine, please contact the Development and Alumni Relations Office at 410-516-0776 or jhmalumni@jhmi.edu, or visit