Charlie Wiener has created an unshakeable sense of community among Osler House Staff, past and present. His leadership is anchored in a complete belief and lifelong investment in the people that he leads. 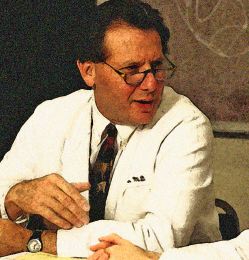 Dave Dilworth based on a photo by Keith Weller

Over the past decade, more than 1,000 medical students have rotated through the Osler Medical Service. Hundreds have served as house officers in the Osler Residency Program. And nearly 40 have held the post of assistant chief of service, each leading one of the four medicine firms comprising the academic teaching service.

The common thread of mentorship for each of us has been Dr. Charles Wiener. After a decade at the helm of the Osler program, Charlie departs to become the dean and CEO of Perdana University Graduate School of Medicine in Kuala Lumpur. This Hopkins venture will establish Malaysia’s first fully integrated private four-year medical school and teaching hospital (see p. 4 for the full story).

So for those slated to work with Charlie at Perdana U., I thought you might appreciate a brief preview of what to expect:

Charlie can play BlackBerry Brick-breaker and nap, while at the same time leading resident report. He has a Rain Man-like ability to quote from all seven seasons of Aaron Sorkin’s The West Wing, his favorite TV show. And in the winter months when a new flock of aspiring interns descends on Baltimore to interview for a chance to join the Osler ranks, Charlie shows up to every resident applicant dinner and promptly grabs a beer. Then, as a loyal 1982 medical school graduate from the University of Miami, he seeks out the poor applicant from University of Florida just to tell him that his or her football team stinks. Most of us know Charlie is kidding, while the kid from Florida is entertainingly left to wonder.

For an entire generation of Osler residents and assistant chiefs of service, Charlie has been the standard-bearer of our program’s culture. It is a culture built on certain principles: an abiding responsibility for patients, compassion for society’s less fortunate, appreciation for complexity, and the occasional willingness to use colorful language…for emphasis.

Among the members of my Osler residency class of 2008, nobody embodied this culture better than a gifted physician named Priya. Sadly and suddenly, Priya was taken from us during our final year of residency.

As always, the real Charlie was on display. In the most tragic of circumstances, he led.

He led by consoling us and crying with us. He would be the first to offer a hug or shoulder to anyone in need. He led by putting words to the unfairness of it all, while at the same time renewing our program’s timeless value that we are all a family. He led by going beyond words, establishing an annual house staff award bearing her name and honoring her passionate approach to medicine. He led by being there for every member of the Osler house staff, as he always has been.

Charlie is there in the good times and even more present in tough times. That is leadership that lasts.

His office door is always open, his pager always on, and his phone (even in serious meetings) always set on that obnoxious classical music ringtone.

He has created an unshakable sense of community among Osler house staff, past and present. The proof is on display at any medical conference, anywhere in the country, where Charlie gets approached by an alumnus of the medical school or of the Osler program. And despite the thousands of students and residents he has trained, he invariably remembers a name, a spouse, or a personal anecdote. His leadership is anchored in a complete belief and lifelong investment in the people he leads.

He has been a stalwart defender of the program from enemies, foreign (see www.acgme.org) and domestic. Under any clinical or personal circumstance, he has our backs.

In a memorable scene from West Wing, Deputy Chief of Staff Josh Lyman gets himself into some trouble. Josh’s character (like an Osler resident or two) is brilliant, impeccably credentialed, but known for impatience and giving fiery attitude to narrow-minded, myopic members of Congress standing in the way of progress.

After one of Josh’s more colorful outbursts, Leo McGary, the White House chief of staff, calls Josh into his office and sternly lectures him about his behavior. As Josh prepares to walk out of Leo’s office feeling small and scolded, Leo says to Josh, “Hey kid. So long as I got a job, you got a job, understand?”

Charlie is our Leo McGary.

So with due respect to the Hopkins brass and international dignitaries involved in Charlie Wiener’s transition to Malaysia, and to those of you who will get to work with him at Perdana U.:  You cannot yet fully appreciate how lucky you are to have drafted Charlie.

And while his mailing address moves to the other side of the planet, his leadership vision, voice, and antics will endure permanently under the Dome.