Archives - "Lasik" for the Lungs

"Lasik" for the Lungs 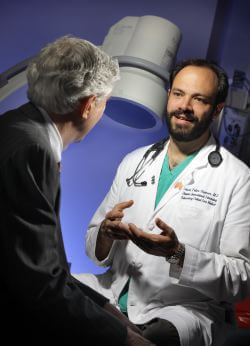 Interventional pulmonologist David Feller-Kopman has a new way to reduce some patients’ need for inhalers.
Photo by Keith Weller

David Feller-Kopman would love to see more of his asthma patients freed from their inhalers, and he’s about to get his chance.

The interventional pulmonologist participated in trials for a novel procedure several years ago and welcomed its FDA approval last April. Now he’s brought the technology to Johns Hopkins, so he can offer Maryland’s first procedure to treat patients with severe asthma.

Dubbed bronchial thermoplasty, the outpatient procedure actually unfolds in three stages, three weeks apart. Feller-Kopman uses a bronchoscope to deliver short pulses of radio-frequency energy to targeted areas of a patient’s airway. The pulses therapeutically ablate some of the smooth muscle tissue in the airways, reducing their ability to constrict during an asthma attack.

Feller-Kopman says the series of procedures, delivered under anesthesia, proved very effective in the 237 patients who participated in the trials. Patients treated with thermoplasty had significant reductions in severe asthma exacerbations and emergency room visits, as well as significant improvement in quality of life.

“Some of the patients just swear by it,” Feller-Kopman says. “They can go out and run and perform normal activities, where previously their lives were significantly impacted by their asthma.”

The three ablations are broken down by lung region. Physicians first apply it to the right lower lobe, then the left lower, and then to both upper lobes.

Feller-Kopman says his ideal patient candidates include adults with severe asthma who are not well controlled on inhaled steroids and long-acting beta-agonists.

“Like Lasik for the eyes, thermoplasty is clearly an elective procedure,” says Feller-Kopman, “but for the right patient, the results can be quite impressive.”