Archives - Hospitalists at the Helm

Hospitalists at the Helm

See why a fast-growing breed of medical specialists could hold a key to increasing patient safety while cutting costs. 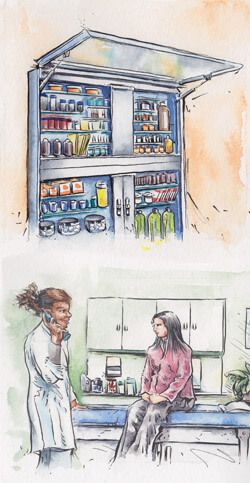 1 2 3 4
Optimizing antibiotic use (top) and a captive audience.

Twenty years ago, few had heard the term “hospitalist.” Today, hospital medicine is the fastest growing specialty in medicine—and may well be pivotal in the national effort toward health care reform. Taking over the care of hospitalized patients from harried family doctors, who have less time than ever for patient rounds, hospitalists aim to improve patient health while increasing efficiency and cutting costs, says Eric Howell, director of the hospitalist service at Hopkins Bayview Medical Center. Over the past decade, says Howell, Bayview’s service “has matured into one of the best in the country.” Fittingly, for a physician who started his academic career with a degree in engineering, Howell’s got the data to back up his assertion.

Core to their mission, he and his fellow hospitalists split their energies between patient care and designing new systems to improve everything from “red alert” hours (ambulance diversions due to shortages of ICU beds) to patient wait time in the Emergency Department. Here’s a quick look at early successes achieved at Bayview by this new breed of doctor.

Smarter prescribing of antibiotics within the hospital can reduce antibiotic resistance, improve patient safety, and cut costs. Since 2006, hospitalist-led efforts have reduced “inappropriate” prescribing from 65 percent to 26 percent, cutting the daily cost of antibiotics per patient from $26 to $17. By making prescribing physicians aware of less expensive (and equally effective)  antibiotics, hospitalist-led campaigns saved nearly $100,000 in antibiotics costs between fiscal year 2008 and 2009—and achieved a dramatic decrease in hospital acquired clostridium difficile associated diarrhea.

Bayview inpatients are often among the most vulnerable, without access to preventive health services. Hospitalists have developed inpatient treatment programs—for everything from tobacco dependence to hypertension control—and trained hospital staff to implement them.

Nationally, readmission within 30 days of hospital discharge now occurs for one in five patients, eating up $17.4 billion of Medicare’s budget. Maryland has the second highest readmission rate in the country.

At Bayview, hospitalists devised and tested a new discharge plan for elderly patients that, in trials, has reduced readmission rates by one-third. Some 89 percent of the elderly patients reported a “high-quality” transition home.

Through “active bed management,” hospitalists have cut the average ED patient wait by 30 percent, from 7 ½ hours to 5 hours, 13 minutes, since 2006. How it works: The hospitalist on duty is the single coordinator for admissions. Working 12-hour shifts, he/she regularly rounds the ICUs and visits the ED to monitor congestion/flow—and can assign medical admissions to beds across the hospital, or call in additional hospitalists.

At most medical centers, hospitalists admit patients each day they work. At Bayview, hospitalists take turns each day being on call for all admissions—then manage patients they’ve already gotten to know on their other days. Result: Bayview has reduced inpatient length of stay by one-half day, from 4.1 to 3.6 days. Lower length of stay has added six “virtual beds” to a hospital in need of increased capacity.

Better bed management equals fewer ambulance diversions. Since 2006, such “red alerts” have dropped from 2,025 hours a year to 50 hours, saving Bayview at least $2 million (each hour of diversion equals $1,000 in lost revenue).