Seventy years ago, a group of residents secretly maneuvered a hat onto the Christ statue's head. They didn't even have to sneak into the Hospital to do it. 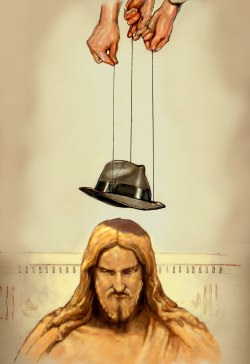 1 2
And why, you might ask, would hardworking doctors-in-training bother to concoct such a piece of mischief? “Because we couldn’t throw the hat on,” answers one who was there.

It was a prank that’s never been forgotten. On a dark evening in the late 1930s, a group of residents, working with painstaking precision, succeeded in lowering a felt hat onto the head of the 10-and-a-half-foot Christ statue that greets visitors as they enter the domed original Johns Hopkins Hospital. And why, you might ask, would hardworking doctors-in-training bother to concoct such a piece of mischief? “Because we couldn’t throw the hat on,” responds George W. Mitchell, Jr. ’42, now 93 and living outside San Antonio, Tex. Mitchell, who was a medical student at the time and in on the conspiracy, describes how three or four of the residents stood on the balcony overlooking the statue and put threads through the hat. Then they lowered it onto Jesus’ head and pulled out the threads. “To get it down, the Hospital had to get the fire department.”

Those who know Johns Hopkins today, with its plethora of rules and regulations, will no doubt find it surprising to learn that a group of residents could get away with such mischief. But this was 70 years ago, and the residents had one big thing going for them. They didn’t have to sneak into the Hospital after hours to pull off their conspiracy. They lived there: night and day.

From the time Johns Hopkins was founded in 1889 until the mid-1950s, physicians-in-training—residents—lived under the Dome. Interns began their life on the fourth floor and moved down each year as they moved up in residency. And despite the scaled-down accommodations, doctors who lived there during those years seem to have remembered the experience fondly for the rest of their lives. They recall the camaraderie, the pleasures of a simpler era, and the pranks that relieved the tedium of their hard work.

“We had a lot of fun,” Benjamin Baker ’27, now deceased, told this magazine in 1988, recalling his four years under the Dome. “We had to. There wasn’t anything else to do except work. It seemed like I put on a white coat and pants on the first of July, and the first time I took them off was New Year’s Day.” Baker described the pleasure of sitting and chatting with his fellow interns in the heat of a Baltimore summer on the bridge that linked the Dome with the wards. “Then we’d get up and go to work. The only other thing we did was walk down to the corner of Orleans and Broadway, where there was a speakeasy, and get ether beer.”

The pranks helped to keep them going, Baker said. Sixty years later, he recounted one such mischievous act from his internship year. At that point, Baker recalled, a formidable administrator named Miss Howland, who ran the admitting office, lived directly across the hall from the chief resident, a dignified New Englander. “One night,” Baker said, “a bunch of us interns went to a dance at the nurses’ residence on top of Hampton House. Walking down after the dance on about the third floor, I saw a sign on a door that said:  Please Be Quiet. A Night Nurse Is Sleeping In This Room. I took the sign, and the next morning, the old battle-axe looked across the hall and saw it hanging on the chief resident’s door!”

In those days, “things were a bit looser,” says Mitchell, who lived under the Dome in the 1940s and went on to become an Ob/Gyn specialist. He recalls one resident who even had a piano hauled up to his room. “I remember seeing that piano dangling outside of the building. They had a difficult time getting it through the window. I had an extremely large, very comfortable room with Edmund Novak, who was in my class,” Mitchell says. “The only problem was that it was on the fourth floor and there was no elevator, so trips back and forth to the emergency room and clinics became a little arduous.”

His memories of life in the Hospital also have lingered. “There were no rules that I was aware of about having women in the dormitory, so we had parties there,” Mitchell says. “We had nurses come from their residence across Broadway, and we had dates in from town. We had a radio, and we had alcohol, and that’s about all you really needed.” And despite the relaxed existence, the residents were remarkably sedate and well-disciplined, Mitchell says. “We all wore the white uniforms, and black ties, and the nurses all wore their caps and aprons. But we had a very good time.”

C. Rollins Hanlon ’38, a long-time leader of the American College of Surgeons Foundation, recalls vividly the brief time he lived under the Dome when he covered for an intern named Willard Weary (“he always signed his notes Weary Intern”). Now 95, Hanlon and his wife, Margaret Hammond Hanlon ’44, live on Chicago’s North Shore in the same house they’ve inhabited for 41 years. Like Mitchell, Hanlon describes his room in the Hospital as huge, “with the bed more than 30 feet away from the phone on the opposite wall. You would think they could have worked out some better arrangement,” he says, “but every time that phone rang, you had to get out of bed, walk across that cold wooden floor, and answer it, so it was a bit of a Spartan existence.  It’s amazing how that cold floor stands out in my memory.”

Security under the Dome, Hanlon recalls, was something of a joke.“When we as house officers would come in through the front door, there was an elderly gentleman who insisted that we sign our names in the book before we went on to our quarters. After signing our own name a few times, it occurred to a number of us that we ought to put more distinguished signatures down. I don’t know how many times we signed W.S. Halsted [Hopkins’ world-famous first chief of surgery] and other noteworthy names.” Today, Hanlon wishes he knew what became of that book, because “it would be a wonderful thing to look at and see whether I could find my genuine signatures and also my spurious ones.”

Still, as pranks go, putting that hat on the Christ statue stands out in the memory of anyone who viewed the results. “I never knew who actually did it,” Hanlon says. “It may have been irreverent, but it was a technical challenge, and the next day everybody saw this thing and marveled at how it had been put there.

“It was all harmless humor,” Hanlon says. “I think it was a bunch of bright young men—and back then, it was essentially all men—who were working very hard. This was what constituted our amusement in those simple days.”