Saudek was an international leader in improving care and prevention of the disease that has reached epidemic proportions. 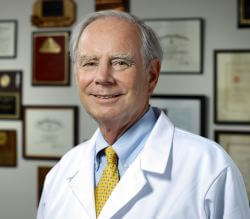 Endocrinologist Christoper Saudek was one of the nation’s commanding generals in the battle to defeat diabetes. A pioneer in the development of implantable insulin pumps and a tireless physician ever available to his patients, he was among the giants of Hopkins Medicine, in the words of Dean/CEO Edward Miller. Saudek died on Oct. 6 of metastatic melanoma. He was 68.

A prolific researcher, beloved clinician, and inspiring Hopkins educator for 30 years, Saudek earned an international reputation for his efforts to spread the message that healthy living can slow diabetes’ advance.

Founder in 1984 of Hopkins’ Comprehensive Diabetes Center, Saudek became president of the American Diabetes Association in 2001. He launched a nationwide campaign to raise public awareness about diabetes’ link to heart disease and stroke, garnering cover stories in Time and Newsweek; inspiring the first-ever issue of the Journal of the American Medical Association devoted entirely to diabetes; and prompting Tommy Thompson, then U.S. secretary of health and human services, to make diabetes prevention and management a top priority.

Although he was the author of a respected diabetes guide and a well-traveled lecturer on the disease, Saudek considered his patients his top priority. He always made time to see them each week, no matter how busy he may have been. “I so enjoyed referring patients to him because I knew that he would not only give them great medical care but that his compassion and understanding of the human condition was unsurpassed. Chris was the best that Hopkins had to offer,” Miller said.

In 2007, Saudek’s passion for patients took him to the South Caribbean island nation of Trinidad and Tobago, where he was the driving force behind a Hopkins initiative to teach medical professionals in that country—where an estimated 20 percent of the population has diabetes—how to improve care for diabetes patients and better spot potential complications early enough to do something about them. The success of that program has led Hopkins officials to explore expanding it to other nations.