Modified diet regimen succeeds in reducing seizures in many adults. 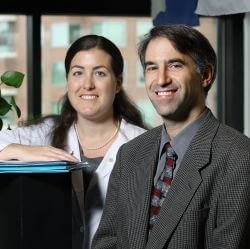 Mackenzie Cervenka and Eric Kossoff recently opened a clinic at Hopkins that helps patients on a modified Atkins diet to control epilepsy.
Photo by Keith Weller

Earlier this decade, Robert Atkins’ New Diet Revolution took the weight-loss world by storm. At the same time, another storm was more quietly brewing in the background: research to see whether a version of Atkins’ high-fat, low-carbohydrate regimen could be used to treat epilepsy.

The investigation was sparked by similarities between the Atkins approach and the ketogenic diet, which induces ketosis by strictly limiting carbohydrates and greatly increasing fats. Since its discovery in the 1920s, the ketogenic diet has been used to treat pediatric epilepsy patients at Hopkins, where some of the largest studies to scientifically test its efficacy have been conducted. Though its mechanism for controlling seizures is still unknown, the diet has proven to be especially helpful for children with intractable epilepsy that isn’t well-controlled by medications or surgery. Many children still use it to keep their seizures in check.

However, the main problem with the ketogenic approach, says neurologist Eric Kossoff, is that it’s very difficult for most adults—who’ve spent their entire lives having infinite choices in food—to stick with. “The ketogenic diet is seen as pretty restrictive,” he says. “There are few choices as to what to eat, patients need to weigh and measure foods, and they have to be admitted to the hospital to start the diet.” When it has been occasionally used for adults, it can also drive up cholesterol, cause menstrual irregularities and lead to weight loss—a worry for patients who aren’t overweight. Though many adult patients start the ketogenic diet with high hopes, the majority of them quit after weeks or months.

So, when the Atkins diet came along, researchers at Johns Hopkins saw a possible solution to make the diet more accessible for adults. They created a modified version, with some distinct differences from the original Atkins diet. For example, the modified Atkins diet is decidedly high in fat, and carbohydrates are restricted indefinitely, not just during an initial startup period. Additionally, weight loss isn’t the primary goal. Though many patients do lose weight on it, calories aren’t restricted. Studies of the new diet in 2003 and 2005 showed that nearly half of adults with epilepsy reduced their seizures by 50 percent after six months.

Now, the modified Atkins diet has a home base at Hopkins, as Kossoff and fellow neurologist Mackenzie Cervenka have started a clinic that helps adults with epilepsy start and maintain the regimen.

Even though there is no weighing or measuring involved and no initial hospital stay, Kossoff and Cervenka emphasize that patients who follow the diet do need medical supervision. That’s where the clinic comes in.

Patients who qualify for treatment—having seizures that don’t respond to medications, surgery or vagus nerve stimulators—first come in for a new-patient visit, in which Cervenka reviews their medical history. During an hour-long teaching session, they learn how to track their weight, urine ketones and number of seizures. Patients also learn from Johns Hopkins dietitian Bobbie Henry, who shares recipes and teaches them how to calculate carbohydrates from food labels. Cervenka and Kossoff give additional details of how the diet works and how to make it helpful. Patients learn about the high-fat foods they’ll be focusing on, including butter, eggs, bacon and mayonnaise.

After a follow-up visit in three to four months to check cholesterol and see how the patient is faring, additional visits are at the patient’s and physician’s discretion, explains Cervenka. She and Kossoff also work with a patient’s regular neurologist to maintain continuity of care.

“This is the first clinic in the world like ours,” Cervenka says. “It feels great to offer this very viable option for adults with severe epilepsy who feel like they have few alternatives left.”