Archives - A Stimulating Approach to Alzheimer's

A Stimulating Approach to Alzheimer's

Could a turnaround in metabolism herald new promise? 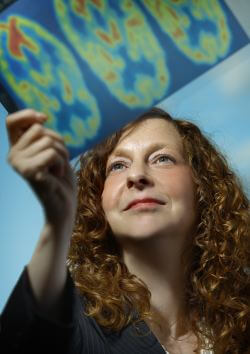 Deep brain stimulation can ease chronic pain as well as troubling symptoms of Parkinson’s disease. More recently, the technique has lifted the dark cloud of intractable depression in some patients in clinical trials. Now researchers are flirting with the possibility of another use. Last summer, with a new pilot study, a research team that included Hopkins neuropsychologist Gwenn Smith raised the idea of using DBS in Alzheimer’s disease.

It was a small trial but an intriguing one, especially given the lack of good therapy for an illness poised over Baby Boomers like a tidal wave.

In the study, surgeons implanted a fine electrode able to deliver a low-grade electrical pulse close to the fornix, a key nerve tract in brain memory circuits. The researchers—most with the University of Toronto—reported few side effects in the six patients they tested. But more interesting, says Smith, was seeing DBS reverse a downturn in brain metabolism that typically comes with Alzheimer’s.

DBS has been thought of for dementias—which, like Parkinson’s disease, are not only localized in the brain but likely engage larger brain circuitry. But what actually sparked the research was unusual. It began with a very obese man in Toronto who had joined a trial of DBS for an eating pathology. The stimulation did him no harm and, unexpectedly, his verbal memory, as measured by standard tests, jumped significantly. Inspired, the scientists held on for two years of rigorous ethical and scientific approval and patient recruitment before an Alzheimer’s phase 1 safety study could begin.

Smith was brought in because of her expertise in mapping the brain’s glucose metabolism in aging and psychiatric disease. It was Smith’s earlier analysis of Alzheimer’s patients’ PET scans that revealed their distinct pattern of lowered brain metabolism. The hippocampus, where Alzheimer’s earliest pathology surfaces, and specific parts of the temporal and parietal cerebral cortex—memory network areas—became increasingly sluggish with time.

In the DBS safety trial, checking glucose metabolism would give an extra measure that participants weren’t harmed. But, even better: “To our surprise, we found a striking increase in metabolism in those areas implicated in Alzheimer’s disease,” says Smith. Interestingly, areas that improved with DBS are sites where the illness’s hallmark amyloid protein collects.

In a trial designed to measure safety, easing cognitive loss is hard to show. Still, that loss appeared to slow in one or two people in the study, team members say, as did the slump in quality of life. What this means is that more study is called for. And Hopkins colleagues agree. “We’re moving forward with a follow-up trial,” says Smith.