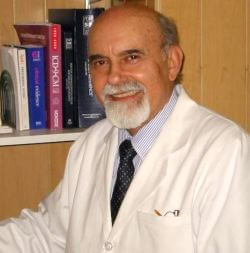 Life’s fragility has been a leitmotiv in Michael Bartalos’ experiences for most of his 75 years.

Son of a Hungarian physician, Bartalos (fellow, pathology, 1961-62; medicine, 1962-64) was born in Slovakia. When he was 4, his family was expelled from there because of his father’s ethnic origin. They moved to Budapest, where his mother died of cancer a year later. His father succumbed to tuberculosis when he was 10. World War II devastated the nation. The Nazis occupied Budapest and “took away my favorite piano teacher, that was also a big trauma,” Bartalos recalls. After World War II, the communists came in.

“It was very bewildering,” Bartalos recalls. “Some very good people just disappeared, people to whom I felt very attached or respected. It was very difficult to make sense out of what was happening.”

After the failed Hungarian revolution of 1956, in which he was among those seeking to overthrow communism, Bartalos had to flee the country. Having begun his medical education at the University of Budapest, he completed it at Ruprecht Karl University in Heidelberg. There he became deeply intrigued by philosophy—a rare interest for a physician, he believes.

Bartalos’ philosophical bent became a key aspect of his subsequent 40-year career at Columbia University. He not only held appointments in human genetics and development, psychiatry, surgery, pathology, radiology, and pediatrics, but for 19 years also directed one of Columbia’s 80 acclaimed “university seminar” faculty conferences. These cover an encyclopedic range of subjects. In Bartalos’ case, the focus was—and remains—how people deal with death.

Founded in 1970, Columbia’s annual Seminar on Death brings together faculty and professionals ranging from physicians and psychologists to theologians, attorneys, even undertakers. Bartalos’ latest book, Speaking of Death: America’s New Sense of Mortality, features 11 chapters based on seminar presentations—four of them his own.

Bartalos says his own views on death, which have evolved over the years, were influenced by Hopkins mentor Philip Tumulty ’40—“a spokesperson for humaneness.”

Says Bartalos, “I don’t believe in afterlife. I just think that when we die, that’s it.