Archives - A Medical School in Malaysia

A Medical School in Malaysia

For the first time in its history, the School of Medicine is exporting its midel for teaching new doctors. 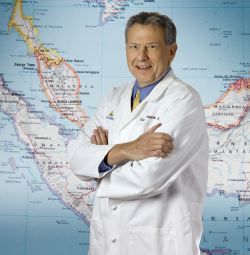 The first items of business in Malaysia for interim Dean/CEO Charlie Wiener are to recruit faculty and students.
Photo by Keith Weller

Like all School of Medicine faculty, Charlie Wiener is used to the rigors of multitasking. Now, however, the professor of medicine, director of the Osler Medical Training program and chief architect of the medical school’s new curriculum is preparing for a period of what you might call extreme juggling. He has been named interim dean and CEO of a medical school that will open its doors in Malaysia in just nine months.

It’s a historic opportunity: For the first time, Hopkins will provide its highly respected model of medical education outside of Baltimore. But the challenges are also substantial. “I have no building. I have no faculty. And I have no students,” Wiener states with surprising good cheer.

On the plus side, the Malaysian government has approved Hopkins’ trademark Genes to Society curriculum, the website for the new medical school is nearly complete, an interim location for classes is in place, and the search is on for the first class of students—as well as the faculty and administrators who will instruct and support them.

David Nichols, vice dean for education, compares the new dean’s task to the founding of Hopkins’ own School of Medicine.

“You have to look for people who are great teachers, great researchers, and have the pioneering spirit to start something entirely new,” he says. “We will use the entire world as a recruiting pool for people in the disciplines we want to emphasize, tied primarily to the curriculum’s instructional needs and to planned research centers of excellence. Clinical responsibilities will phase in later.”

As part of the agreement signed in November, Hopkins experts will help create Perdana University Graduate School of Medicine, Malaysia’s first four-year graduate medical program, as well as Perdana University Hospital, a 600-bed facility that will serve as its first fully integrated private teaching hospital. These facilities, along with a research institute, will occupy a 130-acre site near the capital city of Kuala Lumpur. Groundbreaking is expected by June 1, with completion set for 2014.

In collaboration with Malaysian development partners, the Johns Hopkins University, the School of Medicine, and Johns Hopkins Medicine International will help plan all major aspects of the enterprise, including the design of the medical school and hospital, clinical affairs, and research programs. Fees paid to Hopkins for teaching, advising, and consulting will benefit educational efforts at the home campus.

“We want to help create the next set of leaders in medicine to come out of Malaysia,” Nichols says. “But we’re collaborators here. We’re supporting and assisting, advising and consulting.”

Hopkins is partnering with the government of Malaysia and Academic Medical Centre Sdn Bhd, a subsidiary of Chase Perdana Sdn Bhd, a private development company based in Kuala Lumpur, and Turiya Sdn Bhd, an associate company.

The new medical school will follow Hopkins’ two-year-old Genes to Society curriculum, a course of study that aims to train doctors to deliver individualized medicine. Using a patient-centered approach and innovative teaching methods, Genes to Society teaches students to understand all the levels of the human being: from the genes, molecules, cells, and organs of the patient, to the familial, community, societal, and environmental components that also affect health.

Wiener considers exporting the innovative curriculum as part of a distinguished tradition.

“Hopkins revolutionized how we teach physicians in the 20th century, setting the paradigm for modern medical education. And this is a portal of entry where we can change the model in a country that has asked for our advice and collaboration,” he says.

The Appeal of the American Method

In all of its public medical schools, Malaysia uses the British system of education, which calls for students to begin their five-year training as undergraduates, usually at age 18 or 19, instead of waiting until they obtain the bachelor’s degree that is required in America.

The new medical school will be the first in Malaysia to adopt the U.S. approach to graduate medical education. With more education and maturity, American reasoning goes, college graduates are better prepared to enter rigorous medical training programs.

“To be a good doctor, you need some life experiences and you have to possess a breadth of knowledge,” Nichols says. “For our curriculum in particular, you need to understand different cultures and languages, have good communication skills, and have studied literature, political science, and sociology in addition to understanding biology, genetics, and physics.”

Tan Sri Datuk Dr. Mohan Swami, the Malaysian developer and philanthropist who will construct the new complex, helped convince government leaders about the benefits of the Hopkins approach. Trained as a physician under the British method, Swami appreciates what he calls the “results-oriented’ approach of the American system, as well as its emphasis on research.

“When I was in medical school, we used to memorize things without really understanding the concepts,” he says. “The American system trains doctors to think more independently. I’m sure that we will be able to redefine medical education in our country.”

Currently, he says, at least a quarter of the students whose education is paid for by the government ultimately leave their country to practice medicine elsewhere. Establishing a world-class medical education center near Kuala Lumpur should not only retain and develop the country’s cadre of physicians but also attract top students from other Asian countries, Swami says. Perdana University Hospital, as the country’s first private teaching hospital, may also attract a growing number of “medical tourists” seeking high-quality health care in Southeast Asia.

As many as three-quarters of the first 100 students will be Malaysian, many of whom attended undergraduate programs in the United States. There will also be a mix of international students in the English-speaking medical school. While Malaysian students will qualify for government support, international students must come with funding from their own governments or assemble private funding.

Some Perdana faculty members, Wiener says, will receive training in Baltimore to better understand the Genes to Society curriculum. Hopkins faculty will mentor new professors, either by visiting them in Kuala Lumpur or hosting them in East Baltimore.

Wiener moved to Kuala Lumpur in January and Nichols expects to travel there every six weeks to monitor the progress of the project. Nichols believes some faculty members may welcome the opportunity to teach in Malaysia on a long-term basis.

With plans for the new initiative unfolding at a rapid tempo, Malaysian philanthropist Swami is optimistic. “Perdana means the first, number one, the premier,” he says. “With the help of Hopkins and our government, it will become the number one medical school in Malaysia.”