Archives - View from the Top

View from the Top 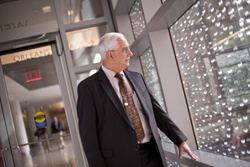 Brought in as a unifier and consensus builder, Ed Miller didn’t disappoint. During his 15-year tenure as Dean/CEO, Miller launched and led the creation of Johns Hopkins Medicine. On the eve of his retirement, he talks candidly about the high points—and some regrets—experienced during his time at the top.

In 1994, edward d. miller jr., an acknowledged star among anesthesiologists, was recruited from Columbia University to rejuvenate the Department of Anesthesiology and Critical Care Medicine here. Little did he suspect his turnaround success in that department would propel him to an unprecedented leadership role at Johns Hopkins.

The early 1990s was a time of upheaval on the East Baltimore campus. Those running the School of Medicine and the Hospital and Health System clashed bitterly over Hopkins’ direction in a rapidly changing health care world. Faculty tensions ran high.

When neither Dean Michael Johns nor Hospital President James Block could bridge their differences, both resigned, and a new governing structure—Johns Hopkins Medicine—was put in place. Henceforth, those historically separate entities would be run by the same boss.

Miller, a neutral figure in that dispute, was asked to fill in as interim dean (Ronald R. Peterson was running the hospital system) while the trustees conducted a national search in 1996 for Hopkins Medicine’s first Dean/CEO. Almost immediately, the easygoing anesthesiologist proved remarkably adept at healing wounds and resolving previously intractable problems.

The breadth of changes under Miller was “nothing short of extraordinary,” says Johns Hopkins University President Ronald J. Daniels. Recently, the first-ever Dean/CEO, who will retire on June 30, took time to review his years at the helm of Johns Hopkins Medicine.

What was it like being named to this new position?

I had to create my job every day. Nobody had done it before, certainly not in this culture. I got up every morning thinking, “How do I take these two sides of the street [the hospital system and medical school] and pull them together?” It helped that when I was interim dean, Ron Peterson and I had worked closely together.

What were your trepidations?

That I would screw it up, get the faculty turned against me. You have to make unpopular decisions in this office. My assignment was to heal the wounds. I’d tell people, “This is not about our internal strife. We’ve got forces out there that could hurt Hopkins’ future plans. We need to work together.”

I had to keep the missions balanced. There was a fear the health system would supersede everything. People thought, “The hospital has all the money and the medical school has none.” Wrong, but that was the perception. There wasn’t enough transparency of data.

So I had to make sure we didn’t overemphasize any of our missions.

What surprised you most back then?

The degree of support I received from the senior people here. I didn’t feel in those early days they wanted to bring me down.

After all the bitterness and anger in the mid-1990s, what changed?

People began to understand it was much more important to make Johns Hopkins Medicine as strong as possible so it could fend off external forces that wanted to crush us. There was plenty going on then—mergers, acquisitions, insurance companies beating us over the head. We had a full plate.

In the Old West, when the Indians attacked the wagon train, the first thing settlers did was circle the wagons. But the second thing was to make sure all their rifles were pointing out toward the enemy. So the lesson at Hopkins was, “Point the guns out, folks, not in! We don’t have time for that stuff.”

What made your relationship with Ron Peterson so smooth?

Trust. Also, neither of us felt we had to be first to the microphone. Both Ron and I keep our egos in check. We can take strong positions but we don’t have to yell it from the mountains.

Why did the new governing structure succeed?

It ended the notion that if you didn’t get what you wanted on one side of the street, you could take your request to the other side. People knew Ron and I were in communication. If there needed to be an answer, they knew I would make the final decision. It gives comfort to an organization because everyone knows there is finality. People began to see this was an organization that would make decisions while letting all voices be heard.

A lot of people would say the buildings. I don’t agree. The buildings—almost $2 billion worth—had to be done. They were a necessity. Hopkins was a research engine, but we didn’t have research space. This is where modern medical education began, yet the school had terrible quarters. I looked at the clinical buildings and saw those old operating rooms and two patients to a room.

Previously, it would have been one side of the street or the other saying, “No, we can’t do it.” But because we had a single Dean/CEO, we worked together and made it happen.

Having said that, I think I will be remembered most for the people recruited to leadership positions. I am very proud of my department chiefs and vice deans. They set the tone. People at Hopkins treat each other with respect. Good ideas are listened to; bad ideas, too. There is a sense, “It is okay to sublimate my individual desire for the betterment of Johns Hopkins Medicine.”

We are a national trust—and we better not forget that. We must live up to those expectations.

What surprised you most during your tenure?

People say an organization this size can’t change. Well, we’ve changed a lot. We’re much more open. We’re much more inclusive. Look at the number of women promoted to full professor. Look at our international work, our Baltimore-Washington strategy, All Children’s Hospital, the fact we have institutes cutting across departments, the fact we’re working incredibly well with the schools of Nursing, Engineering, and Public Health. We used to talk about “The Canyon” on Wolfe Street separating us. It doesn’t exist anymore.

Look at the growth of Johns Hopkins HealthCare with revenues of $1.5 billion. Look at Johns Hopkins Community Physicians with 260 doctors. Look at our home care program. These groups were not on the radar screen when I took this job. Now they play critical, incredibly important roles.

This organization has embraced the notion that the world is changing and we will help lead that change.

What do you consider high points?

Funny, I don’t see it that way. I see these years as a continuous, upward slope we’ve climbed. We’re making progress in so many areas.

Look what we’ve accomplished in diversity. Not many years ago this was a white-dominated, male school. We’re changing that.

We reached out to Malaysia and took a dramatic step in medical education. Some thought All Children’s Hospital in Florida was too far away for the faculty. When I took this job, I couldn’t get the faculty to go to Green Spring Station.

Look at how we transformed Bayview. Years ago, it was seen as a farm team and you couldn’t advance unless you got to the big house. It’s not true anymore. Look at the research and teaching there.

Are there opportunities you are sorry you passed up?

One regret is not pushing for a single bio-specimen repository. We have people collecting specimens throughout the institution, all done a little differently. That’s a mistake. I realize the politics involved—“These are my samples from my patients”—but by treating breast biopsy samples and prostate samples all the same way, by coding and storing the information the same way, we could leverage this genetic information. It is still in silos right now.

A second area would be on the computational side. We’ve made advances but it is not where it should be.

Third, we’ve seen the value of core facilities for clinical investigations and basic research. What other cores should we have built?

Fourth, we need to invest in a sustained approach to minority scholarships. We have a pattern of brinksmanship at budget time to find those funds. We must make sure these scholarships are sustained over the years for both African Americans and Latinos, the fastest growing part of our society.

What improvements would secure the future of Johns Hopkins Medicine?

Massive amounts of philanthropic dollars. Only 3 or 4 percent of our operating budget comes out of endowment. It’s 20 percent or more at some institutions. When you have that kind of free money you can do impressive things.

I know this won’t be popular but we’ve got to figure out how to live within our means. We must choose where to put our resources. People talk about strategic planning, what we want to do. There’s another part of strategic planning: what we’re not going to do. That’s the painful part. I think we can still grow but we may have to stop doing some things. In the past, we tended to just layer programs on top and never take anything away.

How about your future plans?

I’ve gone on the board of the University of Virginia where I started my medical career. I think I can offer a fresh perspective. I’ll be on a couple of other boards I find interesting, such as patient safety. Then I want to think about how I might be helpful here in a smaller role. That depends on Paul Rothman and what he wants to do.

In the past 15 years we created Johns Hopkins Medicine, which has more than lived up to expectations. We’ve balanced the three missions and we’re stronger than ever.

We are positioned to lead the debate on how medicine is practiced in the 21st century. We have faculty thinking about how we train medical students and house staff, how we develop a network of ambulatory sites and hospitals in the Baltimore and Washington regions, how we integrate delivery of care, how we take discoveries in the basic science labs and rapidly bring them forward to patients. On top of that, we are financially sound.

As long as we stay true to our mission, we’ll do just fine. *