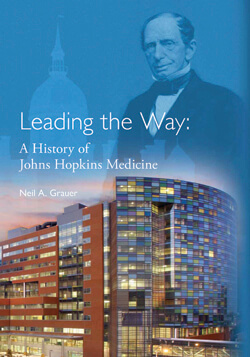 1 2 3 4
Leading the Way's illustrations span Hopkins Medicine's century and a quarter of history...

If ever there was a time of transition at Johns Hopkins Medicine, it would seem to be now, with much of Hopkins Hospital moving into sparkling and modern new facilities and out of the hallways where so much of its history has unfolded since 1889.

But, in truth, it’s not the first time that the Johns Hopkins Medical Institutions has faced extraordinary change. If it were, Neil A. Grauer would have had little to write about in his new book Leading the Way: A History of Johns Hopkins Medicine.

That the author himself has long-standing connections to Hopkins certainly aided in creating a book loaded with fascinating facts and stories that any other individual might never have unearthed. Grauer, a third-generation Hopkins graduate and writer for Hopkins Medicine’s Department of Marketing and Communications, is steeped in Hopkins culture. His great grandparents lived within eyesight of the Hopkins dome and later became close friends of neurosurgeon (and Hopkins legend) Walter Dandy, to whom they rented a room when he was a medical student at Hopkins. “Hence,” Grauer writes, “Hopkins Medicine’s history always has been a source of personal interest—yet as this project progressed, the revelations of its vast depth, scope, and impact have been astounding and often daunting.”

Cover-to-cover, the 416-page heavily illustrated book details the evolution of the institution, from its conception by its namesake and benefactor to its modern-day incarnation as a full-fledged health system with influence spanning the region, country, and globe. Permeated by a host of Hopkins luminaries—from Sir William Osler, William Halsted, William Welch, and Howard Kelly to Peter Agre and Carol Greider, Hopkins Medicine’s latest Nobel Prize winners—the book offers a comprehensive look at how Johns Hopkins evolved through the years, with a level of painstaking detail that borders on intimidating but leaves few questions unanswered and answers questions one might never think to ask. (Zelda Fitzgerald, for instance, was a patient of Adolf Meyer and wrote her autobiographical novel, Save Me the Waltz, during several months spent at Hopkins, while her husband F. Scott Fitzgerald worked on Tender Is the Night, in an apartment across the street from Hopkins’ Homewood campus.)

While the book easily recounts many—if not most—of the institution’s triumphs, it also does not hold back from reflecting on more tumultuous times, ranging from the tragic death of 18-month-old Josie King in 2001 to a tense period of strained relations between the Hospital and the School of Medicine during the 1990s.

But the majority of Leading the Way covers the history of Hopkins’ most storied figures, the foundation of its clinics and programs, and its remarkable expansion from a single building in a still-developing region of Baltimore to its long-standing status as the nation’s best hospital.  Lauren Glenn