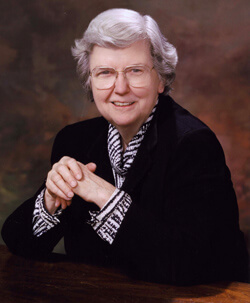 The most important attribute for any scientific researcher, said Mary Ellen Avery ’52, is persistence. “Knowing what you want to do and not being easily discouraged is key,” she told the Center for the History of Medicine in 1982. “If it’s a question that’s worth pursuing, it’s probably worth continuing to pursue.”

The question that Avery was determined to answer in the late 1950s was why the lungs of many premature babies didn’t work properly, leading to their death from respiratory distress syndrome (RDS) within days of their birth.

What she discovered was that the lungs of these tiny infants lacked a foamy coating called surfactant, a mixture of phospholipids and proteins. Her discovery led to surfactant replacement therapy that since has saved more than 800,000 babies and continues to do so today. When she began her research, some 15,000 babies a year died from RDS. By 2002, fewer than 1,000 did.  Avery, who died on Dec. 4 of complications from Alzheimer’s disease, was, as the New York Times headline on her obituary said, the “savior” of premature babies. She was 84.

Avery’s association with Hopkins—and fascination with pediatrics—began long before she became one of only four women in the 90-member Class of ’52. Growing up in Moorestown, N.J., Avery lived next door to the family of Emily Partridge Bacon, who received her MD from Hopkins in 1916.  Bacon, who was chair of the Women’s Medical College in Philadelphia, “would come out to Moorestown every Sunday and sometimes take me into the hospital to see the preemies,” Avery recalled in 2005.

Known as “Mel” to friends and colleagues, Avery was a warm, supportive mentor with high standards who not only had a profound impact on pediatrics but “shattered each glass ceiling she encountered,” as the Boston Globe put it, playing an important role as a pioneer for women in medicine.  She was the first woman physician in chief at Children’s Hospital Boston; the first woman to head a clinical department at the Harvard Medical School; the first woman president of the Society for Pediatric Research; and the first pediatrician to head the American Association for the Advancement of Science (AAAS).

She received the 1991 National Medal of Science; was elected to the National Academy of Sciences in 1994; and was given the American Pediatric Society’s John Howland Award, its highest honor, in 2005. In addition to being AAAS president, she also was publisher of its Science magazine, and chair of its board of directors.

She received some 17 honorary degrees and published landmark textbooks, including The Lung and Its Disorders in the Newborn Infant, a standard for 25 years, and Avery’s Diseases of the Newborn, now in its ninth edition. In her later years, she traveled the world to improve global health by promoting oral rehydration therapy and polio vaccination, human rights, and the elimination of socioeconomic disparities.  Neil A. Grauer