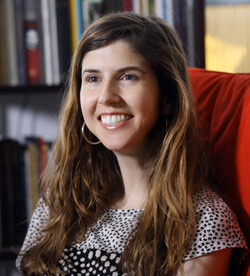 Pearson makes a "laugh-aloud debut" with her young adult novel.

Q.: What do psychiatry, poetry,  adolescent angst, and livermush— “the poor man’s pâté”—all have in common?

A.: Joanna Pearson ’10, a second-year psychiatry resident at the Hopkins Hospital.

A witty wordsmith whose poetry has earned prizes and fellowships, Pearson, 31, also is the author of a just-published “young adult” (YA) novel, The Rites and Wrongs of Janice Wills. It’s about a 16-year-old high school student who considers herself an anthropologist and dissects the doings in her small North Carolina town, renowned as the Livermush Capital of the World. (Livermush is a Southern breakfast staple of which the less known about its contents, the better. It’s mostly pig liver, head parts, and cornmeal.) Reviewers have praised the novel as a “laugh-aloud debut,” “rewarding, honest, and quite funny,” and “a romp.”

A native of Shelby, N.C., and a 2002 graduate of the University of North Carolina at Chapel Hill, Pearson earned a master’s in Anglo-Irish literature at University College Dublin before having an epiphany while working in Washington D.C. with the Americorps National AIDS Fund’s program for homeless women living with AIDS.

“On a day-to-day basis, most of the women with whom I worked were dealing with challenges of addictions recovery and mental health. It occurred to me then that until those mental health needs were addressed adequately, it’s hard even to begin to address other health issues,” she says. “I like how, in this sense, good psychiatric care can provide a foundation for everything else. I also like how psychiatry is a very narrative-oriented field. Language is an important tool.”

So Pearson decided to go to medical school. She entered Hopkins in 2004, then put her medical education on hold to get an MFA in poetry from the Johns Hopkins Writing Seminars in 2009. She completed her MD in 2010.

The Rites and Wrongs of Janice Wills chronicles its insecure young protagonist’s growing self-awareness and understanding of others as she casts a pseudo-anthropological eye on the culture of Melva, her hometown.

Pearson admits that there’s a lot of her own hometown in how she describes Melva, but says the Shelbyites “have been really sweet and excited” about being fictionalized. Shortly after her book came out, Shelby held its first-ever Miss Livermush Pageant, she says. “Perhaps that was a coincidence, but I like to believe that I predicted the future!”  Neil A. Grauer