Archives - Islets for the Weary

Islets for the Weary 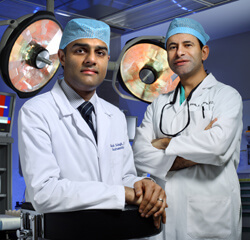 Chronic pancreatitis can be agonizing.

“For certain patients, a total pancreatectomy is their last option to escape the lasting, severe pain of chronic pancreatitis,” says Hopkins’ Vikesh Singh. “And while we can indeed replace digestive enzymes that the body no longer secretes without a pancreas, compensating for the [organ’s] lost islets is another story.” The “brittle” diabetes that can result resists control, requiring patients to take insulin shots or use an insulin pump in an attempt to regulate widely varying blood sugar levels.

Researchers have found an effective work-around, however, by harvesting a patient’s own islet cells before removal of the pancreas, and then transplanting those cells in the patient’s liver, where they can begin producing insulin. This past summer, Hopkins began offering such “islet autotransplants” for men and women with intractable chronic pancreatitis—a new capability that makes Hopkins Hospital the Northeast’s high-volume center for the procedure, says Singh, medical director of the islet autotransplant program.

What prompted the new Hopkins effort? “We found ourselves with a happy confluence of expertise and support,” says Singh, gastroenterologist for the team that includes pancreatic surgeons, transplant surgeons, cell biologists, endocrinologists, and pain specialists.

Choosing patients for both pancreatectomy and transplant is complicated. In his role as “selector,” Singh first winnows  patients based on anatomy: “We consider those with small- rather than large-duct pancreatitis, as they have fewer options.”

But he also must carefully assess how advanced the disease is—no simple matter when biopsy of the pancreas, with its risks, is rarely an option.

“There’s a fine balance point,” Singh says. “You want to remove a pancreas because there’s pain. But you hesitate to take out an organ with mostly good function. Yet if you wait until the pain requires narcotics, is that too late? The natural history of chronic pancreatitis means islets die. Wait too long and there’s nothing to transplant. In the long run, we do a lot of evaluating, most of it as a team.”

“We bring a rich experience to treating pancreatitis,” says pancreatic surgeon Martin Makary, the program’s surgical director. That includes the benefits of doing a high volume of pancreatectomies and other surgeries on the organ.

Makary and his surgical team perform some 400 pancreas operations a year, more than any hospital worldwide. Having introduced a laparoscopic version of the Whipple procedure to Hopkins, he’s readying a minimally invasive total pancreatectomy to pair with the islet transplants.

Once a pancreas is removed, Makary explains, the transplant surgery team performs “a massive laboratory endeavor”—all totally within the OR—to retrieve its islets. A good harvest is crucial, as transplanted islet cells no longer reproduce. Once Makary injects them via catheter into the liver, they’re free to set up shop.

As for the other patients, those with chronic large-duct pancreatitis? They’re also treated at Hopkins’ Pancreatitis Center, Singh says. They can opt for less-major surgery to improve duct drainage and/or remove scar tissue, thus improving function and slowing decline.

“A lot of our patients whose lives were on hold are able to return to their jobs,” Singh says.  Marjorie Centofanti