Archives - Blending Past and Present

Blending Past and Present 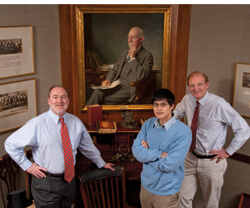 Norman Barker, Alan Wu, and Ralph Hruban have created a “Ken Burns–style” film with a compelling arc to it.

On his first day as a Hopkins medical student, Ralph Hruban ’85 was given a print of John Singer Sargent’s iconic painting The Four Doctors. He didn’t know what to make of it.

“Drs. Halsted, Kelly, Osler, and Welch seemed distant historical figures with little or no connection to me,” he recalls. Years later, however, as a professor of pathology and oncology on the faculty, he heard Halsted’s then successor as Hopkins’ surgeon-in-chief, John Cameron ’62, give a riveting account of Halsted’s extraordinary contributions to medicine despite a decades-long battle against drug addiction.

“The impact of Dr. Halsted was fascinating. Above all, his ability to fight against terrible challenges was inspiring. I couldn’t get his story out of my mind,” Hruban says.

So Hruban collaborated with a friend to write a screenplay based on Halsted’s story. It’s the tale of a brilliant young New York surgeon, renowned for his swiftness in the operating room and charisma outside of it, brought down by his efforts to advance anesthesia by experimenting on himself with cocaine. His career wrecked, his personality changed, he moves to the just-opened Hopkins and rises again to the top of his profession while enduring his drug dependence.

Because the screenplay required inventing scenes, however, “it wasn’t very satisfying,” Hruban says. So in 2009, he decided to produce “a Ken Burns-style” documentary. He joined forces with pathology photography director Norman Barker, an associate professor of pathology and art as applied to medicine, and Stanford College-educated filmmaker Alan Wu, the son of T.C. Wu, a professor of pathology, oncology, and obstetrics and gynecology.

With the assistance of Cameron, whose 1997 Annals of Surgery article on Halsted served as their template, they have produced a captivating, hour-long film that aired in April on WETA-TV. A gift from the Blum-Kovler Foundation helped fund the project.

Many of those appearing in William Stewart Halsted have substantial Hopkins connections, including Malcolm Brock ’91, a thoracic surgeon and researcher; Stewart Finney ’86, a cardiac surgeon who is the great-grandson of Halsted’s closest surgical colleague, J.M.T. Finney; Hopkins-trained medical historian Howard Markel ’94; Paul McHugh, former director of the Department of Psychiatry; and William Rienhoff III ’49, a surgeon whose father was Halsted’s last chief resident. In addition to its exceptional use of numerous historical photos, the film is illustrated with drawings by pioneering medical artist Max Broedel, as well as works by current faculty Timothy Phelps and Beatriz Martin Villalba.

Hruban says he had three main reasons for wanting to produce the documentary. “One is that the story has a wonderful arc to it, with this rise to greatness, a fall, and then a rise again. The second is that it has an important message: People can overcome tragedy in their lives. Halsted was able to achieve greatness despite this tragedy of addiction. Third, as someone who loves Hopkins, I think the story celebrates Johns Hopkins ... and appreciating our history is part of what makes Hopkins great. There’s a great quote from Osler: ‘The secret of success in an institution is to blend the old with the new, the past with the present, in due proportion.’”  Neil A. Grauer