Archives - Trouble in Mind: An Unorthodox Introduction to Psychiatry

Trouble in Mind: An Unorthodox Introduction to Psychiatry 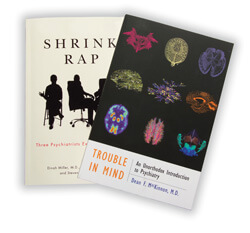 In his 2008 book, Try to Remember: Psychiatry’s Clash Over Meaning, Memory, and Mind, Paul McHugh, former longtime director of Hopkins’ Department of Psychiatry, pointedly observed that the practice of his specialty is “riven by factions.” He wrote that he hoped his book would “hasten the day when coherence reigns in my discipline.”

Dean MacKinnon, an associate professor of psychiatry and behavioral science who has been at Hopkins since 1990, is even more pungent in his phraseology. “Pundits periodically pitch spitballs at my profession,” he writes in Trouble in Mind. “Psychiatry, they say, rates somewhere between hocus pocus and a threat to Western civilization.”

In defense of psychiatry, MacKinnon asserts, “If these critics could spend a month on the wards with me and see how treatment restores life to suffering patients and brings relief to their families, perhaps they would shed their ignorance.”

Yet MacKinnon acknowledges that critics have a point if they find the logical foundation of modern psychiatry “to be a rickety edifice… ungrounded in the firmament of psychology and neurobiology.” He notes that the official manual of psychiatric diagnosis, the Diagnostic and Statistical Manual of Mental Disorders (DSM), may be a useful resource for clinicians, scientists, and administrators, “but nature did not define the DSM’s official diagnostic criteria; committees negotiated them.”

MacKinnon contends that “psychiatry has no coherent concept of the mind”—what he defines as “the information-processing functions of the brain,” the central focus of psychology—and argues that “to neglect the study of the mind is to neglect the theoretical foundation of psychiatry’s core mission: the treatment of mental illness.”

To help students and trainees in psychiatry to make sense of this fascinating—and sometimes confusing—discipline, MacKinnon has crafted an intriguing, exceptionally well-written (and sometimes slyly droll) text that he hopes will enable them “to see the mind as an organic function, and the phenomena of mental illness in their functional contexts.” He calls it a book that “explodes the conventional psychiatric diagnoses” found in the DSM, then rearranges the fragments of psychopathology so that practitioners “can understand it as a disruption of a specific function of the mind.”

MacKinnon organized the text into five main chapters dealing with what he calls the “Organic Mind,” the “Elementary Mind,” the “Integral Mind,” the “Synthetic Mind,” and the “Psychiatric Mind.” Each chapter is divided into subsections with amusingly provocative titles such as “Sate Ain’t So: Immoderate Appetites,” “Off-Track Vetting: Disrupted Attention,” “Piece of Mind: Communication Breakdown,” as well as a useful summary at the conclusion.