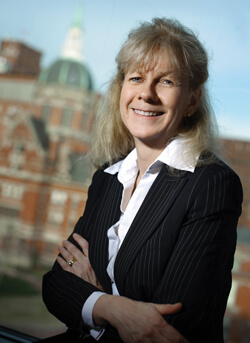 "The death of a patient is one of the most difficult experiences a pediatrician will ever encounter,” says Serwint.
photo by Keith Weller

As a professor of pediatrics, Hopkins’ Janet Serwint has seen firsthand just how painful it is for families to lose a child to illness or accident—and how crucial it is for health care providers to handle such deaths with compassion.

Each year in January, she oversees a daylong grief and bereavement program for second-year residents that gives them expertise in talking with parents about the death of their child and in handling emotionally charged situations. Launched in 1996 and underwritten by the Cameron Kravitt Foundation, the program features gripping encounters with standardized patients—professional actors portraying stricken parents.

The catalysts for the program were Beverly and Jason Kravitt, whose second child—delivered 30 years ago in a Chicago hospital—had no heartbeat and was stillborn. A horrified Beverly Kravitt was allowed to hold the baby’s body for a few moments—then never saw him again. The physicians and nurses she encountered seemed inadequately trained to help her deal with her devastating loss. Her conclusion: Young physicians desperately needed instruction in how to deliver the hardest words they’ll ever have to say: “Your child has died.’”

In 1982, the couple created their foundation (using the name they’d selected for their still-born son) and began working with Hopkins doctors to develop a training program—a process that took more than a decade. Those closely involved included then director of pediatrics, Frank Oski; Serwint, director of pediatric resident training; and Lorene Rutherford (HS, pediatrics, 1989-90), at that time a Chicago-based pediatrician. Serwint became the program’s guiding force.

“The death of a patient is one of the most difficult experiences a pediatrician will ever encounter,” Serwint says. “Providing training and practice to pediatric residents in how to respond to such tragedies is essential to prepare them emotionally, and to help them to be able to provide the very best care they can to families in crisis.”

Since the program’s launch in 1996, some 360 pediatric residents have participated in training. (Twenty-four chaplaincy residents also have been trained, after the program was broadened in 2005.) Serwint, an intensely caring mentor to all her protégés, has also helped establish a nearly identical resident-training program at Cornell, also sponsored by the Cameron Kravitt Foundation, which has  trained an additional 80 residents since beginning in 2006.

In the Hopkins training program, residents spend their mornings engaged in encounters with the standardized patients, observing their colleagues’ similar encounters, and assessing how they all handled the harrowing experience. In afternoon discussion groups, they also learn about autopsy and organ donation; gain an understanding of the role that ministry plays for grieving families; hear presentations from actual parents whose children have died; find out about the multidisciplinary strategies available to support families; and learn how important it is to deal with their own emotional stress and potential burnout.

“Countless times I have received feedback from residents who have graduated, commenting that they had a similar experience in their career and the strategies from the seminar came back to them. This type of program needs to be available to all pediatric residents,” Serwint says.

Serwint, president of the 1,900-member Academic Pediatric Association, says other residency programs around the country have expressed interest in establishing their own seminars. The Kravitt Foundation hopes sufficient funds can be raised to ensure its expansion.  NAG