By figuring out how proteins function, Jennifer Van Eyk shortening the time to clinical breakthroughs. 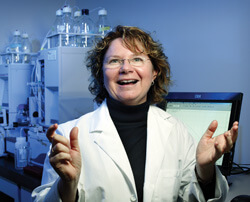 Proteomics—the study of the thousands of proteins that are the body’s circuit breakers, turning on and off the millions of functions that make life possible—isn’t a field for the easily discouraged.

“People get scared because of the numbers,” says one of the field’s foremost researchers, Hopkins’ Jennifer Van Eyk. Such consternation is understandable; when compared to studying chromosomes or proteomics’ direct ancestor, genomics, parsing the sheer volume of proteins—and how they interact with each other—is an exponential effort. It’s the difference between quantifying how many beaches are in Maryland versus counting each individual grain of sand.

And yet, Van Eyk and her Hopkins colleagues are making substantial headway in this incredible census. Traditionally, researchers create specific antibodies to detect the presence of a given protein. Now, utilizing breakthrough mass spectrometry technology and terabyte computing power, Van Eyk is creating quicker ways to quantify how proteins function both individually and en masse, potentially cutting discovery time from decades to years, and perhaps shorter.

By looking at peptides—essentially a short string of amino acids—Van Eyk is able to extrapolate which far-larger proteins they belong to. In essence, by looking at a single brick, she and her colleagues can figure out the entire structure of the house.

“There are probably rules about how proteins interact; the tools we’re developing are helping us to understand the connections,” says Van Eyk, who directs 12 principal investigators  at Medicine and the School of Public Health under a $12 million grant to advance and better utilize proteomics in the clinical setting.

Van Eyk is unraveling how proteins play a role in diseases ranging from Marfan syndrome to rheumatoid arthritis and heart disease. The work in Marfan focuses on the aorta. In some children the syndrome results in dissection of the aorta, which can lead to death.

With pediatric cardiologist and geneticist Hal Dietz, Van Eyk is analyzing proteins involved in the dissection, which has led to identifying biomarkers. An early detection test could be on the market within a few years, which would allow doctors to better monitor timely drug interventions. “It’s pretty cool,” says Van Eyk, her voice rising with excitement.

So is her work unlocking the proteins involved in heart function. From figuring out how stem cells differentiate into heart cells, to studying how reperfusion—the sudden flow of oxygen to starved tissues—affects vasculature, Van Eyk is looking at how protein subcomponents come into play and react to the cardiovascular environment in which they function.

When a heart event occurs, the proteins that rev up for the emergency often overreact, creating inflammation and other issues that may be as problematic as the initial incident. But if those reacting proteins can be isolated and their functions regulated, “we could create a cocktail that allows us to control what those cells do,” says Van Eyk.  Mat Edelson