Intelligent computers will enable us to deliver on the promise of individualized medicine. 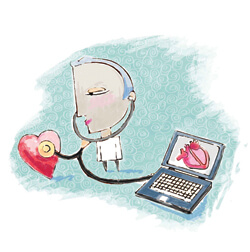 Last February, we got a glimpse of medicine’s future from an unlikely source—the television game show Jeopardy! A specially programmed IBM supercomputer named Watson—loaded with 200 million pages of content—challenged two human champions of the television quiz show. Watson, which can process data from a million books in just one second, won with ease.

It was fun to watch this novel contest, but IBM didn’t spend $3 million on an electronic quiz whiz just to show off. The company believes there’s a future for Watson in helping doctors make clinical decisions.

Rapid advances in computational medicine have prompted Hopkins to start looking at how it can turn intelligent machines like Watson into vital tools for doctors as we move into the rapidly developing realm of patient care known as “individualized medicine.”

Researchers today can identify and interpret an increasing number of genetic variations within each of our 100 trillion cells. They can spot changes in an organism’s genetic makeup due to environmental factors. All of this is giving doctors a vast amount of health data on each patient.

It takes highly sophisticated computers to sort through such an immense warehouse of individualized genetic data. Someday these machines will slice and dice this information, based on instructions from physicians, and compare a patient’s genotype and phenotype to the norm, spot inherited diseases and identify future genetic or environmental health hazards—all at lightning speed.

David Valle, director of the Institute of Genetic Medicine, now offers a test to young couples—before they have children—that tells them if their genes contain any of 448 rare, inherited diseases. With this information, couples will know the precise risks involved in conceiving children. It lets them make an informed choice. Down the road, I see many more genetic tests capable of predicting all sorts of medical problems, such as which children are prone to obesity and diabetes. Think of the proactive steps physicians and families then could take to prevent or delay the onset of these chronic, life-altering conditions.

Yet as more predictive tests become available, they will lead to thousands and thousands of knotty questions for academic medical centers like Hopkins.

Should we undertake the immense task of genotyping and phenotyping every patient? Who’s going to pay for it? How will we collect and collate this avalanche of data? How do we analyze the information and piece it together in ways that are most beneficial, while maintaining patient privacy?

We need proof of principle. I’ve asked Antony Rosen, director of Rheumatology, to lead a team exploring such multifaceted questions. For example, how can we modify our EPIC electronic patient record system so it plays a bigger supporting role in the work of physicians? I’ve suggested the team look at three projects—one on rheumatology, one on coagulation and deep-vein thrombosis, and one oncology study—and see how computational medicine can be applied.  In each of these cases, we will be collaborating with faculty members from the Johns Hopkins Whiting School of Engineering, who bring their considerable expertise in biomedical engineering, computer science, applied and computational mathematics, statistics, and systems engineering to the table to partner in this effort.

Computers like Watson can’t think. They can, though, deeply analyze a mountain of content for physicians. They can provide doctors with an in-depth, genetic profile of each patient. They can be programmed to compare a patient’s medical situation to an enormous number of similar cases.

For example, Director of Radiation Oncology Ted DeWeese is involved in a study of head and neck cancers with two other institutions. That gives him a very large data set. By tapping into computational medicine, he can figure out which therapies worked in each type of cancer. He can splay his own data against a broad population of oncology patients, build on treatments that got the best results, and then apply what he learned to his patients’ unique situations.

Individualized medicine also should help us prescribe medications more effectively. Not everyone responds to drugs the same way. Tamoxifen, for instance, works well with some breast cancer patients but not with others. If we knew a heart patient’s detailed genetic background, bleeding and coagulation problems might be avoided by prescribing Coumadin in targeted, individualized doses.

That is medicine’s future. Supercomputers can provide a huge helping hand. Yes, doctors must be trained on how to input the right data and ask the right questions. It means more standardized entry of patient information to create a giant base of genetic and medical data for computers to mine.

Make no mistake: Physicians will continue to call the shots. The new wrinkle is that a computational genius will be at their side helping them come up with the most precise, individualized diagnosis and treatment for each patient.