The unexpected things (paying taxes?!) that make us feel good. 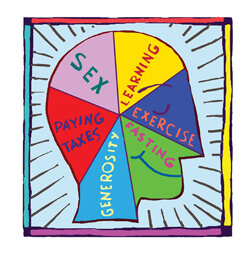 David Linden’s office is crammed with stuff—notably, artwork—that reveals a bit about what activates his pleasure circuit. There’s a portrait titled “My Daddy” that depicts the Hopkins neuroscientist sporting not only his trademark ponytail but also an enigmatic mark on his cheek that looks kind of like a bat, and about which the artist comments in crayon: “a kiss I gave him.” Looking at his daughter’s creation causes Linden to smile almost as deliriously as the men depicted in the Yue Min Jun print above his desk; however, their jaw-splitting grins seem incongruous given the context of warplanes and helicopters hovering in the background of that painting.

Different as these two pieces are, they collectively illustrate a provocative point that Linden makes in The Compass of Pleasure, his newly published book: “For us humans, even mere ideas can activate the pleasure circuit. Our eclecticism where pleasure is concerned serves to make our human existence wonderfully rich and complex.”

Eclecticism, indeed. A child’s drawing and a famous painting activate the same pleasure circuit. Likewise, contributing to charity and paying taxes (yes, you read that right!) mash the human pleasure button. If you’re at all inclined to wonder how, I’m happy to report that reading 209 pages about how pleasure happens on a molecular level is, in itself, a darn pleasurable act.

Linden’s latest subject matter—our human brains and behavior as they relate to pleasures, both virtuous and non—is inherently fascinating to us because, well, it’s about us.

“This topic of pleasure is, I think, absolutely central to our humanity,” Linden says. “It informs public policy, laws, morals, and religious ideas.”

Unlike other equally intriguing areas of neuroscience that he says aren’t quite ripe for the picking by a general audience, the study of pleasure has seen tremendous advances in the last 15 years, and its stories, which he gleaned from labs all over the world, largely haven’t been told.

Interestingly, little to none of the research cited in Linden’s book reflects what’s going on in his own lab at Hopkins, which focuses on memory storage and synaptic function. That distance is a good thing, Linden says. “It’s a lot easier for me to write about gambling, food, sex, and exercise because my mindset is much closer to that of the reader,” he explains.

Regular Joe though he may be, when the subject matter relates specifically to pleasure, Linden maintains a lofty perch as a reliable authorial expert about neuroscience generally. His contribution to the conversation about pleasure is significant. As a self-proclaimed ambassador from the cellular-molecular neuroscience nation to the world at large, this Johns Hopkins professor of several decades is hardly a spoon-feeder of neuro-babble. Nor is he a yawn-provoking purveyor of superfluous scientific detail as it relates to the medial forebrain pleasure circuit. He’s fun—even if he does insist we grapple with a bit of anatomy and (ugh) chemistry. At times, he’s wildly—and quite appropriately—irreverent.

I mean, what’s not to like about a nonfiction science text that poses this question from Chapter 4, aptly entitled, “Your Sexy Brain”: “What is your cat thinking while she watches you have sex?  Even if you are as sexually conventional as they come in this culture …your cat still thinks you are a freak.  And she’s right.”

What worked for Linden in his first book, The Accidental Mind, a 2008 Independent Book Award Silver Medal Winner, works well again; namely, wit, use of first person, humor, and anecdote. The Compass of Pleasure sports not only a really big subtitle (How Our Brains Make Fatty Foods, Orgasm, Exercise, Marijuana, Generosity, Vodka, Learning and Gambling Feel So Good), but also a large point of view that’s no-holds barred Linden.

Among the top notions Linden hopes to impress upon readers is that “we must,” he emphasizes, be compassionate toward addicts: “I have a political agenda. It’s informed by understanding of biology, but it’s a political agenda nonetheless.”

The only rational outcome of understanding the biology of the pleasure center in the brain and seeing how it is influenced by genetics, epigenetic factors, hormones, stress, and life experience is that we cannot conceive of addiction as anything other than a disease process of the brain, he says, adding: “I think our legal system and many of our cultural ideas are really out of whack with that fundamental understanding of biology.”  Maryalice Yakutchik