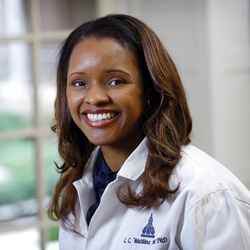 Strong mentoring has helped keep Watkins in the Hopkins fold.

She gets excited when talking about a fourth-grade science fair she won with a project that measured the effectiveness of various insulation materials—tin foil, cloth, cotton, dark paper—when wrapped around an ice cube, a still-warm charcoal briquette, and other items.  (Her parents, both educators, were insulating their home’s attic at the time and helped her come up with the idea.)  “That was so much fun!” Watkins says emphatically.

In 1992, she earned a coveted spot in the Meyerhoff Scholars Program at the University of Maryland Baltimore County (UMBC), a program recognized by

the National Science Foundation as being a national model for increasing the number of African Americans in science, technology, engineering, and math. With program funding, she pursued her first serious research under the guidance of Hopkins’ Lisa Portis Morgan (fellow, pharmacology) and Lawrence Schram (faculty, biomedical engineering). They studied the neurophysiological processes of pelvic pain. “I loved that project so much, that I stayed in the lab for the entire year,” she recalls.

When it came time to choose a medical school, she was impressed, she says, that Ben Carson, Levi Watkins, and Roland Smoot were “active mentors to the medical students.” Says Watkins, “I knew how important mentoring had been as an undergraduate, so it all felt like the best place to be.”

Stephen Desiderio was directing the MD/PhD program at the time, and the other students in it “seemed to have a personal connection to each other as well,” she adds. She subsequently came under the guidance of neuroscience legend Solomon Snyder, who “is like a second father to me,” she says.

Having completed a fellowship in geriatric psychiatry, Watkins, 35, joined the psychiatry faculty in March—thanks in part to a Mosaic Initiative award co-sponsored by the School of Medicine and the university. Begun in 2008, the Mosaic Initiative helps deans, department directors, and search committees recruit diverse faculty. The award will supply three years of support for her salary and research.  Neil A. Grauer