Archives - Medicine When I Was Young

Medicine When I Was Young

An acclaimed heart specialist and former dean thinks back to a simpler Hopkins 65 years ago when cardiology first took root here. 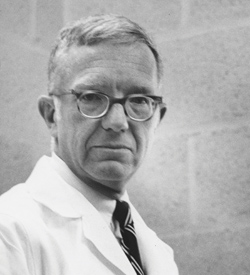 1 2
By the mid-1960s, the Wellcome Lab was breaking new ground in cardiology research, says Ross. “Cardiologists from all over the world now traveled to Hopkins to observe us at work.”
photo courtesy Allan Mason Chesney Medical Archives

I am 87 years old. I came to Johns Hopkins right after World War II and had a wonderful career here. I started as an intern, served as chief resident on the Osler Service, became director of the cardiovascular division and ended as dean of the School of Medicine from 1975 to 1990. During most of those years I wanted to come to work every day and never wanted to leave.

Now, as my days grow less active, I find myself thinking back over my time in medicine. Often, too, I meet people who ask about my early years in cardiology, the field that became my specialty. How, they wonder, were we able to treat heart problems without today’s technology and cardiac surgery, and before heart specialists even existed at Hopkins? And since I may be the only person left who can tell that story I have decided to put it in writing. What’s surprised me is that it’s made me see things I never saw before.

When I came to Johns Hopkins from Harvard Medical School in 1947, there was no division of cardiology. There was simply a Department of Medicine. As the chief of this department Johns Hopkins had just named A. McGehee Harvey, a brilliant young clinician who could discuss any patient presented to him with any problem. Harvey didn’t believe in specialists. He taught us that the good Osler-trained internist should be able to handle any illness that came along. For the most part he was right. Specialization comes with technology, and in the 1940s the only technology for heart patients was the electrocardiogram.

Do not think, however, that Johns Hopkins remained undistinguished in cardiac care. In 1947, Hopkins was already world famous as the birthplace of the Blue Baby Operation. This dramatic repair of the congenital heart defect known as Tetralogy of Fallot—a connection of the subclavian artery to the pulmonary artery—had been pioneered here the year before by Helen Taussig in pediatric cardiology and Alfred Blalock, head of surgery. It made Hopkins the first hospital in the world able to help thousands of heart patients condemned to a brief and limited life. People flocked here and waited day after day, hoping they or their children would be deemed eligible for the miraculous surgery.

During these years, the Blue Baby Operation overshadowed everything else Hopkins was doing. Surgical treatment of congenital heart disease had become the frontier of medicine, and this was the place to learn the field. From all over the world, bright young MDs congregated here to work with Blalock in surgery and Taussig in her clinic. Many of them would go on to become the next generation of leaders in their specialties.

And yet, it was in the Department of Medicine, where cardiology was simply part of internal medicine, that my lifelong fascination with the heart took root. Here is how it happened:

Because the electrocardiogram was the technology of the day, Harvey put a faculty member, Elliott Newman, in charge of the heart station, the place where patients went to have an EKG taken and read. Newman was an internist, not a cardiologist, but this assignment turned him into a master EKG reader. Each year, a couple of assistant residents were selected to learn the technique with him. In my first year as a resident, I became one of those EKG readers, and with that stroke my life as a heart specialist began. We residents soon learned to interpret EKGs, we possessed the keys to the heart station, and we controlled the EKG machines during the late hours when most of the action took place. Because it is a truism in medicine that those who control the technology control the specialty, we became the consultants for adult heart patients on the six Osler Wards.

Still, it wasn’t until Elliott Newman left for a cardiology position at Vanderbilt that Harvey at last accepted that specialization was the wave of the future—even at Hopkins. Reorganizing the department into divisions, he finally urged residents to focus their training on the fields of medicine that attracted them most.

It’s interesting for me to think back to the events that shaped that first adult heart division and my own career. A turf battle helped. Helen Taussig’s blue babies were growing up and coming to us on the medical service for their follow-up visits. Taussig, of course, was given privileges to admit patients to the adult ward, but she expected her pediatric trainees to handle their care. That caused problems. Many of the trainees were from other countries and had no background in adult cardiology. Several had difficulty communicating in English. All sorts of disputes erupted over patient care. I turned out to be the beneficiary.

In 1954, when I was 30 years old and had just finished a year as chief resident, Harvey and Taussig asked me to become the physician of record for her older-than-15 patients, with her as consultant. Taussig and I liked each other so she also invited me to take part in her pediatric heart clinic. About the same time, one of the surgeons, Henry Bahnson, taught me how to do cardiac catheterizations.

By 1957, I was entrenched in clinical work, teaching residents, and doing research on heart failure when Harvey offered me a stunning promotion—to become director of the division of cardiovascular medicine. I would continue seeing patients, but I would take on two administrative assignments as well: hiring new faculty and determining the research focus for cardiology at Johns Hopkins. That second role would prove vital. Our division’s funding and its success in recruiting trainees (fellows) to come and work with us depended on the quality of our research. Happily, we had strengths to build on. A stream of patients of all ages continued to flow into Hopkins hoping the Blue Baby Operation could cure them. For some 50 percent of those patients whom surgery couldn’t help—mainly those with coronary artery disease—we needed better methods for studying their heart problems.

That autumn at a meeting of the American Heart Association, I met Mason Sones, a cardiologist from the Cleveland Clinic, who told me about an approach for making images of the heart. It was called cineangiography. By using a movie camera, the technique actually showed the heart in motion. The more I learned about cineangiography, the more I realized the astonishing possibilities it could offer us. Not only would we be able to view a patient’s heart propelling blood throughout the body, we’d be able to watch the valves as they functioned. What’s more, we would gain remarkable capabilities for visualizing the coronary arteries. Cineangiography, I decided, would become Hopkins’ new method for studying and diagnosing heart disease.

It took most of the next year to study the equipment options for setting up a lab, but the cineangiography system we finally built was unique to Hopkins. Featuring an image-amplifier, it provided enlarged views of the adult heart. A beam splitter on top presented us with moving images at the moment a person’s heart was being photographed. We would now be able to study the coronary arteries with remarkable precision. The equipment, of course, was expensive, but Harvey found us our support. With a grant of 45,000 pounds (about $7 million today) England’s Wellcome Trust funded a new cardiology study facility at Johns Hopkins that would be named the Wellcome Research Laboratory. The happiest years of my professional life were about to begin.

Remembering the feverish excitement, the joy, that gripped our cardiovascular division as our lab moved into cineangiography thrills me even now. Let me try to describe what the technology brought us. Before cineangiography, to obtain x-ray images of a patient’s heart we had to inject a large amount of contrast material into the aorta. The large pieces of film we then retrieved had been exposed at three-to-five frames per second, making it almost impossible to assess the functioning of the valves and ventricles. Now, with our new system, we were capturing crystal-clear, close-up, moving pictures of the valves and ventricles taken at an amazing 24 frames per second. What’s more, by inserting a catheter directly into the coronary arteries and injecting a small amount of contrast material, we were retrieving views of the arteries as never before. With stark clarity we could see occlusions of the vessels and the coronary collaterals that had developed around those obstructions. Over the next few years, images like these would become the basis for studies of coronary anatomy and the natural history of coronary artery disease. And when coronary artery bypass surgery was introduced in the early 1970s, these studies would help evaluate its effect.

Still, Hopkins could never have achieved the distinction it did with cineangiography if it hadn’t been for one junior faculty member. We’d known that J. Michael Criley was a fine cardiologist. What no one realized was that he was also a world-class photographer, whose grasp of this technology proved uncanny. It was Criley, working with Hopkins’ fine director of radiology Russell Morgan and me, who assembled our system and then moved us into breathtaking new areas of study.

By the mid-60’s, the Wellcome Lab was breaking new ground in cardiology research. Members of our faculty provided the first explanation for prolapse of the mitral valve; they offered new understanding of pressure changes in the left ventricle due to hypertrophic cardiomyopathy; and they used images from patients with coronary artery disease to plot the natural history of that disease. Cardiologists from all over the globe traveled to Hopkins to observe us at work. As the lab’s prestige grew, I hired several bright young faculty members, including the first women in our division, who made our team even stronger.

And yet, by the end of the decade, I was spending less time as a cardiologist and more in national roles. In 1972, I became president of the American Heart Association and soon afterward chairman of the Heart Council of the National Institutes of Health. Then in 1975, I was named dean of the Johns Hopkins School of Medicine. My days as a heart specialist were over.

But cardiology was changing too. By then, cineangiography had become a routine procedure. As research began refocusing on heart studies at the cellular level, I recruited a young faculty member named Mike Weisfeldt (today’s director of the Department of Medicine) to replace me as chief. A new era had begun.

Today, as I think back, I take enormous satisfaction in my 50 years at Johns Hopkins. Still, it is that decade at the helm of the cardiovascular division that stands out as the highlight. Step by step during those glory years we laid the cornerstone for a cardiac service that continues today as one of the finest in the nation. *