Archives - Illustrators of the Century

Illustrators of the Century

One hundred years ago, Max Brodel put art into medicine. Today the program he launched here continuesto produce some of the world's most influential medical illustrators. 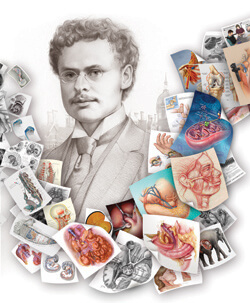 1 2 3 4 5
select images from the faculty, students, and alumni of Art as Applied to Medicine

In the beginning, there were the doctors, who dedicated their lives to healing sick people. But very soon after the beginning came the illustrators, who vividly captured the craft of healing so that others might learn it.

Johns Hopkins’ medical illustrators first became an academic department here 100 years ago, with an endowment from Baltimore-born American rail baron Henry Walters. The department’s founding director was German emigrant Max Brödel, who, since his arrival from Leipzig in 1894, had been toiling closely at the sides of Hopkins surgical pioneers Harvey Cushing, William Halsted, and Howard Kelly.

Today, Brödel’s contemporary successor, Gary Lees, displays a certain reverence as he delicately unsheathes the original text that Brödel published in describing the new department’s mission. “Illustrations of medical books are a highly specialized form of art,” Brödel wrote in the document’s opening paragraph, quickly invoking the need for his students to become deeply familiar with the actual medical principles underlying their works. “It is obvious that a medical illustration can never be a success if the artist does not fully comprehend the object which requires illustration.”

Even at its genesis, the program was called “The Department of Art as Applied to Medicine,” a name that Lees explains still provides guidance for weeding out aspiring practitioners of the fine arts who might be hoping to master human anatomy as a steppingstone to other ideas. In his field, says Lees, “an illustration must teach something.”

Since its beginning a century ago this summer, Brödel’s big idea has helped launch an outsized share of some of the most influential medico-scientific illustrators in history. If the total worldwide population of professional medical illustrators now numbers 1,500, Lees and his contemporaries feel comfortable saying the Hopkins DNA can be found deeply embedded within 70 percent of them.

Herewith, in honor of the department’s 100th birthday, we display a few great moments from three of the Hopkins group’s rising young stars—just the vanguard in an extraordinary legacy envisioned by one extraordinary man.

A devotee of long-form visual storytelling, Jennifer Fairman has quickly become a favorite among medical scientists and editors when it comes to imparting complicated concepts.

From early childhood, Fairman felt divided between her love of science and art. She considered dedicating her life to medicine, perhaps pediatrics. But even from her first encounters with crayons, Fairman felt drawn into the world of creative process. Then, as a high school student, she came upon a brochure that depicted a professional medical illustrator. It was a thunderbolt.

“What is that?” she thought, lingering to obsess over the photograph of such an artist in her studio space. “I suddenly realized I could marry the two disciplines I loved the most, which was really cool because I had thought I was going to have to give up one or the other.”

She continued pursuing both art and biology during her time at the University of Maryland, winning a slot in Hopkins’ medical illustration program in 1997, graduating in 1999, and later returning as a full-time faculty member. Though Fairman maintains steady teaching duties, specializing in digital illustration, animation, web design, and interactivity while contributing to a five-year atlas project, she does get to do an occasional magnum opus. The most recent one that pleased her, she says, is a major editorial project about the life cycle of malaria produced for Johns Hopkins Public Health magazine.

Dubbed “A Killer in the Blood,” the three-page foldout deftly begins with the seminal moment when an infected insect accosts its victim, then moves into a progression of through-the-microscope renderings of malaria’s complex biological process, finally settling on the small African village in Zambia that serves as the microcosm for how the scourge affects real people. The project’s challenges kept Fairman awake at night, often working in her home studio until 2 a.m., after the baby was well tucked in.

One detail that demanded extra wrestling, Fairman explains, was her desire to render an enlarged blood vessel through the entire work in a way that connected the elements. “I’ve got to work on the blood vessel,” she told herself at night. “It’s got to flow logically, in a way that shows the deadly cascade of this disease’s life cycle as it escalates into something ominous. It’s got to overflow like ... a river!”

In the finished work, even casual observers will note that the blood vessel that anchors the spread’s left side slowly meanders and melds into an actual river flowing into the small African village at the spread’s close.

But the illustration’s more arresting moment occurs at the nexus in which insect meets host. The mosquito is larger than life, its presence dominating the pages as its proboscis penetrates through the layers of human skin as the feeding bug finds its blood meal, essentially injecting a parasite into its unwitting host. That exquisitely captured moment quickly progresses into an explanatory panel that shows how the parasite “explodes with these merozoites,” says Fairman. “That’s the point where the parasite goes from hundreds into millions, all from a single mosquito.” *

Lydia Gregg is quite clear about her most prized work to date, which juxtaposes a peacefully sleeping baby with the disruptive presence of an arteriovenous malformation that extends across the front of his brain. The image was commissioned for the cover of an annual special issue of Child’s Nervous System.

Gregg takes special pride in portraying a broader sense of the baby’s brighter life to come. “The touch of traditional work done by hand is the only way to get across the feeling and emotion in that child’s face,” she says. The child’s little hands gently clutch a fleece blanket, which subtly commands the viewers’ attention. Gregg explains that she composed the blanket’s underlying structure with a 3-D modeling program to make it look hyper-realistic, “because that’s where the rest of the story unfolds.” In the blanket’s pastel details, one sees a birthday cake illuminated by five glowing candles, surrounded by soft, life-affirming colors. A viewer gets the feeling that this child has a future.

As medical illustrators go, Gregg is unusually accomplished, given that she just graduated from the Art as Applied to Medicine program here in 2007. She was born in Michigan’s Upper Peninsula, where her mother’s work as a biologist opened up her world to the possibility of combining science with art at a very young age.

When Gregg was still a student here, Hopkins interventional neuroradiologist Philippe Gailloud noticed her remarkable mastery of neurovascular anatomy after collaborating with her on her thesis project. He immediately recruited her to work directly in his division of interventional neuroradiology. The group works closely, says Gregg, often including her as a co-author on published papers.

“That’s a giant honor for me,” she says. “I love being a part of the process. It keeps your mind active on multiple levels: visual, conceptual, and literary.” *

Betsy Weissbrod is more familiar with the grim work of soldiering than the average Joe. In an earlier life as Sgt. Weissbrod, she deployed to Iraq in support of Operation Iraqi Freedom. So when surgeons asked her to help document the dynamics associated with traumatic brain injuries acquired in battle, this artistically inclined soldier—now a staff sergeant in the Reserves—came prepared with a basic orientation.

Weissbrod, who graduated from the Art as Applied to Medicine program here just last year and now works as a medical illustrator for the U.S. military at a surgical simulation lab in suburban Maryland, was tasked with creating a collection of images to appear in a book chapter.

One panel captures pivotal events in the case of a soldier struck by a bullet while on patrol in Afghanistan. The insurgent’s bullet hit just above the right ear of the soldier’s Kevlar helmet; the helmet deflected the bullet itself but buckled enough to scatter multiple skull fragments into the soldier’s brain. The panel’s resulting five images serve as a vivid demonstration of the armored material’s strengths and weaknesses. Weissbrod’s renderings annotate a close-up of the deflected bullet’s impact point, then track the fragment pathways deep into the soldier’s brain tissues. Inset illustrations clearly show how the hurtling bone fragments produced pseudo-aneurysms in two cerebral arteries.

With this assignment, Weissbrod never had direct patient contact, relying instead on intraoperative video and case photos supplied by the surgeons along with “lots of back and forth” as the work progressed from rough sketches to a finished series of six multi-panel illustrations for the entire book chapter.

While this particular soldier’s medical outcome is protected by privacy regulations, Weissbrod is not immune to the human consequences of her subjects. “I always ask,” she says.  *