Fishel used humor to help others cope with bad news. 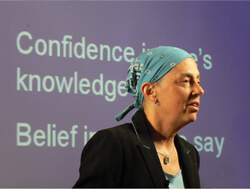 “This is what I call a hair distribution problem,” Rhonda S. Fishel ’78 told an audience in 2006, alluding to her chemotherapy-induced baldness. “When it falls off your head, it grows on your legs and face.”

Fishel possessed an unconquerable sense of humor. She maintained a moonlighting career as a stand-up comedian even as she became acting chief of surgery at Baltimore’s Sinai Hospital—and battled uterine sarcoma. The disease claimed her life last November 22. She was 55.

The daughter of a Baltimore surgeon, Fishel was known as a meticulous, deliberate practitioner whose key concern was safety, and whose patients adored her. She often conducted follow-up visits with them at their homes.

Fishel used her own cancer not only as a subject for humor but as the basis for a program, “On Receiving Bad News,” that she developed to teach fellow physicians how to deal compassionately with patients when giving them a grim diagnosis. “You go into these rooms knowing that you’re going to destroy people’s lives,” Fishel said in an interview. She traveled extensively to lecture on the subject and continued appearing before audiences until about a month before her death.

“She never gave up,” said a close friend, surgeon Gershon Efron, a former associate professor of surgery at Hopkins and former chief of surgery at Sinai. “She fought all the way and got five years rather than five months, which was the original diagnosis.”

Throughout her fight, humor that was not self-directed also remained a central part of Fishel’s life. “She was a liberal Democrat, and her favorite thing was making fun of politicians,” her partner, Michaela “Mickey” Barron, a nurse practitioner, told The Sun. Neil A. Grauer