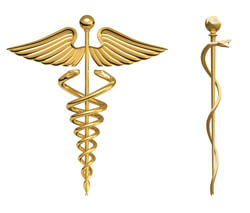 As a former Halsted resident ( 1972-1974 ), I am proud to receive Hopkins Medicine magazine. Your most recent edition (Winter 2011) has as its cover story an article by Linell Smith entitled “Cautionary Tales” about hospital safety.

The cover illustration is that of a Caduceus, with caution tape replacing the two serpents. Please note that the Caduceus [top] is a symbol for commerce and negotiation, not the symbol for medicine. The traditional symbol for medicine is the rod of Asclepius, a single serpent entwined around a staff [bottom]. As I am sure you are aware, the misconception that the Caduceus is the symbol of medicine stems from the adoption of the Caduceus by a U.S. Army Medical Corps officer in 1902 as a symbol for that group. Since the Caduceus is associated with commerce, theft, deception, and death, we, in medicine, are well advised not to use it to represent our profession.

When I was a student at Johns Hopkins, long ago, we were required as first-year students to take Tempkin's course on the History of Medicine. We learned that the Staff of Aesculapius—one snake, no wings—was the symbol of medicine from the ancient Greek world. Aesculapius and his sons were mentioned in the Iliad, a minor war about, oh, say, three millennia ago.

The Staff of Aesculapius is the symbol of medicine worldwide, and in the United States it is used in the logos of the American College of Physicians and the American Medical Association.

Imagine my embarrassment when the cover of Hopkins Medicine, the magazine from my esteemed alma mater, has as the symbol of medicine on its cover the Caduceus—the symbol of Hermes, god of the underworld (read: dead)! The Caduceus, with its two snakes and wings, is not, repeat not, the symbol of medicine! And Hopkins, with its esteemed traditions and long interest in medical history, should know better. We should not be making the common mistake of the proletariat and use the dreaded Caduceus!

For the true story on the history of the symbol of medicine, visit my website, www.timothyrodgersmd.com, and click on the snake. Long live the Cult of Aesculapius!