Archives - Bariatric Surgery: A Case of Mind Over Matter

Bariatric Surgery: A Case of Mind Over Matter

After major weight loss, a realistic attitude is key. 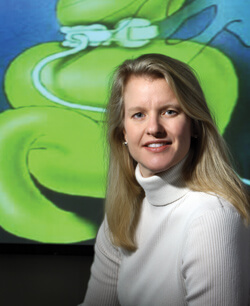 “When a patient admits that weight loss is a process and not an event,” says Janelle Coughlin, “that’s what I hope to hear.”
photo by Keith Weller

You pull yourself up from bed with your cane one morning, your wife ties your shoes and you inch to the recliner, catching your breath. Then comes surgery, and some months later you awake, not sure which is more astonishing: that you’ve lost 75 pounds or that it’s your body that’s taking dance lessons.

“The ability of bariatric surgery to alter patients’ lives is incredible,” says psychologist Janelle Coughlin, and scenarios like this continue to draw prospective patients to hospitals. “Yet though it’s generally a positive step,” she adds, “many people discount the idea that they could end up in a worse place after surgery if they don’t comply with the proper regimen.”

Instilling a realistic mindset and a right attitude is part of Coughlin’s role as head of a behavioral medicine program at Hopkins, one that offers services for patients with a variety of weight-related issues. Most patients, so far, come seeking surgery: They can’t be accepted for it without a psychological signoff. Last year, for example, Coughlin screened more than 250 patients.

Taking a psychiatric history and evaluating mental status are, not surprisingly, part of the screening since two-thirds of severely obese patients have at some time suffered a psychiatric illness, mostly major depression. Yet it’s not so much the presence or absence of illness that’s a concern for the surgery, Coughlin says, as how well it’s managed. “Untreated or unstable major depression is a concern,” she says. “If someone had a major event in the last year, like attempting suicide, surgery should wait.”

Likewise, she also screens for activities that could derail post-surgery success. “I look for patterns or clusters of behaviors,” Coughlin explains. “I wouldn’t necessarily deny patients, say, who binge-eat once a month. That would likely be helped by the surgery. If it’s more frequent, however, or if patients also eat from an emotional need, then they need to understand their relationship between mood state and food. We help raise awareness of both internal and environmental triggers for their eating.”

Coughlin does reality checks, starting with the surgical informed consent. The belief that the surgery is both simple and a cure-all isn’t unusual. But the operations—several types—are complex. The most-performed “Roux-en-Y” procedure, for example, bypasses much of the stomach and upper small intestine and fashions new connections. And afterward, the joy of losing roughly 50 percent of excess weight can be tempered by an inability to eat and drink simultaneously—or to eat a favorite cheese steak sub. For many, their most reliable comfort in life has gone.

“So we help patients identify these challenges before surgery,” Coughlin says, “emphasizing the positive outcomes while honestly describing the work that can lie ahead.” Because it’s impractical for Coughlin to treat every patient she could clear for surgery, she refers those needing ongoing therapy to the program’s psychiatrist Hochang Lee or psychotherapists Jill Varelli and Maura Murphy.

Because Coughlin also researches maintaining weight lost through lifestyle changes—she’s an investigator on several national trials—she’s well aware of the struggles of some bariatric patients several years after surgery. She’s now working to apply the lessons learned to them.  Marjorie Centofanti