Archives - At Home in Boys Town

At Home in Boys Town 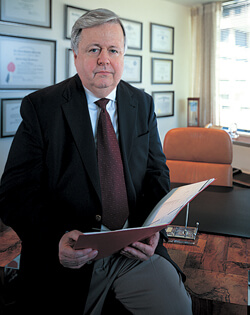 Brookhouser has directed the Boys Town National Research Hospital since it opened its doors in 1972.

Boys Town Village, the home for disadvantaged boys in Omaha, Neb., first captured the nation’s imagination in the 1938 film that starred Spencer Tracy as the home’s benevolent founder, Father Edward J. Flanagan. He established it to be completely nonsectarian and open to all races. Since 1977, it also has been home to the Boys Town National Research Hospital (BTNRH), a research, clinical care, and teaching facility staffed with clinician researchers who strive to transfer their laboratory discoveries to the bedside.

As a medical student and resident, Brookhouser was a protégé of John Bordley ’25 (1903-1993), head of the Department of Otolaryngology from 1952 to 1969; and pioneering pediatric epidemiologist Janet Hardy (1916-2008). Toward the end of his residency in 1972, Brookhouser was conducting research with Bordley, who had been instrumental in developing much of the early technology for testing hearing in young children, when he learned that Boys Town was “quite interested in doing things for children with disabilities.”

He and Bordley met with the Boys Town board “and talked to them about developing an institution that would target primarily children with communications disorders—hearing loss, speech and language problems, learning disabilities,” Brookhouser recalls. The Boys Town leaders quickly established their National Research Hospital in 1972 and appointed Brookhouser its director. Bordley became a consultant, and Hardy—for whom Brookhouser had done research on rubella deafness—joined Boys Town’s national board.

Officially opening in 1977, BTNRH since has grown into a 164,000-square-foot, six-floor facility adjoining St. Joseph Hospital on the Campus of Creighton University in Omaha. It also has a separate technology center for childhood deafness and vision disorders, a second hospital facility and clinics at the Boys Town Village, and an intensive residential treatment center for children with mental disorders. Construction will begin soon on a new center for neurobehavioral disorders in children.

With some 450 employees, including 65 physicians (31 of whom are pediatricians), the BTNRH sees some 40,000 patients annually. They come from all 50 states, some foreign countries, and include the 438 boys and girls who live in the Boys Town Village. (Girls first were admitted to the Village in 1979.)

Brookhouser says the BTNRH has “a substantial commitment to behavioral health.” “Boys Town, of course, takes kids who are troubled, and we now have a number of kids coming to us who are on a large number of psychotropic medications. We’re beginning to do research to see, number one, how we can effectively back them off those medications and, secondly, to make sure that there hasn’t been any damage done by putting them on all of these, because there are very few of them approved for use in children.  They’re being used just as a last resort by clinicians out in the community.” Neil A. Grauer