In the MICU, a move away from deep sedation marks radical change. 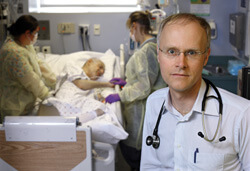 Dale Needham and colleagues in the MICU have radically scaled back the use of sedation; many more patients now remain awake to read, visit with family, and perform physical therapy.

Standing at the bedside, nurse clinician Joanna Kaskasian asks a MICU patient to squeeze her hand when she recites “A” in a series of 10 letters. That’s followed by such questions as, “Are there fish in the sea?” and “Will a stone float on water?”

What might seem like a simple quiz is actually part of a tool that this Hopkins Hospital unit adopted to screen ICU patients for delirium, a syndrome marked by an abrupt change in level of consciousness and thinking ability. Rather than a transient, harmless mental state, delirium is increasingly being considered a symptom of brain injury as urgent as any other type of major organ dysfunction.

“Until recently, we didn’t think delirium represented injury,” says MICU Director Roy Brower. “We thought it was a nuisance that we could treat with medicine. We now consider it an indication of inflammation of tissues of the brain that can cause permanent damage.” Some cases of delirium are inevitable, but research suggests that some of the medications and treatments used in the critical care setting—deep sedation, in particular—may be linked to its occurrence.

The introduction of the screening tool, paired with new protocols that ratchet down benzodiazepine sedatives, have contributed to a radical change in the MICU. Patients who previously would have been continuously sedated now remain awake, read in bed, perform physical and occupational therapy, and visit with family.

It’s a significant departure from past practice that equated deeper sedation with better care. In the past, “we thought we were helping patients—that deep sedation made them comfortable, safer, and not at risk for pulling out tubes,” says Dale Needham, Hopkins critical care specialist and a leader of the delirium effort.

While delirium may be more obvious in patients who mistake their catheters for snakes or attack caregivers, it can easily go undetected in patients who are calm and quiet. As many as 80 percent of ventilated patients experience delirium, most of it undiagnosed by ICU teams, according to a Vanderbilt University study published in 2008 in The Lancet. A 2004 JAMA study found that ICU patients with delirium were 10 times more likely to have cognitive impairment at discharge than patients who did not have delirium.

Months after their discharge, some patients who experienced delirium in the ICU fail to recover their mental acuity; others suffer from depression or posttraumatic stress disorder. Premature death and accelerated dementia have also been associated with delirium. (Whether delirium is the cause of these harmful effects or is just a marker for them isn’t clear.)

“Our approach is to simply reduce or, where possible, eliminate the use of benzodiazepines,” says Needham, medical director of the critical care physical medicine and rehabilitation program. “What we’ve found is that many patients can be comfortable with only intermittent use of low-dose narcotics as opposed to continuous infusions of narcotics and benzodiazepines.”

Twice a day, bedside clinicians use the Confusion Assessment Method for the ICU (CAM-ICU) tool. Developed at Vanderbilt University Medical Center, it is designed and validated for evaluating delirium in nonverbal ICU patients, and it has become increasingly common in Hopkins ICUs.

In the Hopkins Hospital MICU, sedation markedly dropped following adoption of the tool and the new sedation protocol last July 1, according to Needham. In 2005 and 2006, for instance, patients with acute respiratory distress syndrome were kept on benzodiazepine infusions for an average of 70 percent of their MICU days. Since July, that number has decreased to 25 percent.

On the MICU, daily rounds now include discussion of delirium assessment scores, forcing clinicians to address the topic, Kaskasian says. Before, if a patient appeared severely agitated, “we would go up to the physician and say that the patient seems delirious, and the response would be to just order more sedation to try and calm down the patient. Now, since we have a tool, we have something to stand on,” he says.

Nevertheless, changing habits has required hours of face-to-face conversations with skeptics, who are often ready with examples of patients who weren’t sedated and extubated themselves. “What you’re talking about is a culture change in the MICU where deep sedation and bed rest were an intrinsic part of our culture,” says Needham.