Archives - Treating Dementia: Do We Have a Pill for It?

Treating Dementia: Do We Have a Pill for It?

Treatinfg Dementia: Do we have a pill for it? 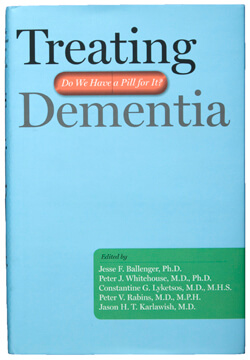 Treating Dementia: Do We Have a Pill for It?

This year marks the 100th anniversary of German psychiatrist Emil Kraepelin’s Textbook of Psychiatry. In it, he coined the term “Alzheimer’s disease” for a case of progressive cognitive impairment in a 51-year-old woman that fellow psychiatrist Alois Alzheimer described in a 1906 lecture.

Alzheimer himself was uncomfortable with having his name put on the condition he reported. He wasn’t sure that he’d uncovered a distinct affliction or simply an early onset of senile dementia. A century later, the debate over that continues—as it does over the relatively recent classifications of mild cognitive impairment (MCI) and aging-associated memory impairment (AAMI).

According to the editors of Treating Dementia, what also is subject to fierce debate is whether the forces of “human ambition and fallibility”—including “the economic, social, and political pressures of an aging population in the United States,” among them the mercantile motives of pharmaceutical firms—are what really is behind the “chameleonic concept” of Alzheimer’s, or AD.

This provocative and fascinating book’s 14 chapters grew out of a 2004 two-day, interdisciplinary conference at the School of Medicine about historical and clinical perspectives on drug development. Twelve of the 24 contributors—including editors Constantine Lyketsos, Peter Rabins, and Peter Whitehouse—are either Hopkins faculty members or alumni.

Divided into four sections, the chapters cover concepts of dementia and treatment; the use and evaluation of drugs for dementia; objectivity, language, and values at the interface of science, medicine, and business; and the “problem of hope,” which, the editors observe, “has always rested uneasily at the heart of medicine.”