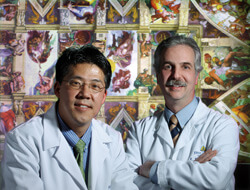 When Rafael Tamargo first laid eyes on the magical frescoes adorning the Sistine Chapel’s ceilings as a high school student, he became so enthralled with Michelangelo’s masterwork that he missed the bus back to Rome. After years of see-sawing between his love of painting and medicine—eventually choosing a life in neurosurgery—Tamargo has returned to Michelangelo to add his thumbprints to the great artist’s visionary work. And this time Tamargo has been aided by the advanced skills of Johns Hopkins medical illustrator Ian Suk.

After a long study, the duo is at last prepared to unveil a Renaissance secret. To wit: In the climactic creationist Sistine panel known as “Separatiion of Light from Darkness,” Suk and Tamargo have detected lines in the anatomy of God’s neck that strongly suggest an underlying structure other than an Adam’s apple. In an image in which the creator’s head is dramatically arched back, Suk spotted the nearly unmistakable form of a brain stem. The news came to Tamargo in an excited phone call. “Rafael,” said Suk, “I’ve found it.”

The background is that, since the 1950s, many have been finding hidden treasures amid Michelangelo’s frescoes. The stakes are more than a fancy parlor game for art historians. As some have argued, such hidden elements could reveal a subversive mockery of the work’s commissioner, Pope Julius II, or of the Catholic Church in broader terms. Tamargo thinks the clues are merely signatures that reveal the artist’s abiding fascination with cadaver studies—an interest he may have downplayed since the Vatican had displayed some ambivalence about such studies in the 1500s.

Some of the “discoveries” in Michelangelo’s work are arguably wishful thinking, but Tamargo found the work of one serious scholar to be a clear breakthrough. In a 1990 JAMA paper, Frank Lynn Meshberger skillfully argued that a pivotal fresco known as “The Creation of Adam” was heavily modeled in the motif of a human brain. “Stunned” by the revelation, Tamargo also thought Meshberger’s analysis made perfect sense. “If you know the brain’s anatomy,” he says, “it’s unavoidable to interpret the painting that way.”

“If Michelangelo used that motif once,” thought Tamargo, “I’m sure he used it again.” At Hopkins, Tamargo also knew he had the ultimate sleuthing partner. “If anyone could find it,” thought Tamargo, “it would be Ian Suk. He knows the neuroanatomy cold.”

Suk says his talks with Tamargo got him “fired up.” As he studied Michelangelo’s panels online, Suk homed in on art historians’ preoccupation with “something about the neck” in the “Light from Darkness” panel. In a 2003 paper, a pair of researchers confidently proclaimed it as “Michelangelo’s Divine Goitre.” But as Suk looked more closely, the goiter claim fell apart. “I know my neuroanatomy,” says Suk, “and this was way too high to be a goiter.”

When an excited Suk summoned Tamargo in December 2008 and then used a series of overlays to build his case, Tamargo could barely contain the thrill. “Ian,” he said, “this is going to be big.”

Their joint paper debuted in the May issue of Neurosurgery.   Ramsey Flynn