A reason for cautious optimism in the battle against ALS 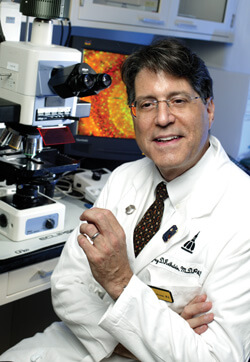 A drug called talampanel—it’s from a family of anti-anxiety drugs—may slow the muscle weakening that comes with ALS, according to a Phase II study led by Hopkins neuro-researchers.

Usually, results of a Phase II trial aren’t the stuff of headlines. The early, small-scale studies aim to show if a drug appears safe and has some good effect. Phase IIs are strong on “maybe” as far as therapy goes, but weak on “definitely,” because the sample of patients tested is fairly small.But this is an exception. Talampanel is news because it’s for ALS—Lou Gehrig’s disease—the progressive, fatal illness that existing drugs can’t stop. Only a handful of potential therapies have passed Phase II. “We’re watching talampanel,” says Hopkins neurologist/neuroscientist Jeffrey Rothstein, “largely because the drug appears to slow the progression of disabling symptoms.”

In the 39 patients who received it, the loss of major daily life activities such as speaking, walking, and dressing slowed by some 30 percent when compared with patient controls given a placebo. They also lost muscle strength less rapidly.

“The effect isn’t overwhelming at the dosage used in this early trial,” Rothstein admits, “but having promising human data is reason enough to keep it in the drug pipeline so we can really find out how it performs for patients.” Based on that, talampanel has already moved to the larger, more powerful Phase III studies.

There’s more. It happens that Rothstein directs the Packard Center for ALS Research, an international body based at Hopkins and considered by most to be a model of its kind. Among other things, the organization makes unusual, savvy alliances with other groups that can speed its search for therapy. The Phase III trials for talampanel may benefit from one such link-up with the Northeast ALS Consortium, a national group that Rothstein helped start that has hugely improved the quality of ALS trials.

Moreover, a sea change looks about to hit in the way scientists view ALS. “We’ve long known that not all ALS patients show the same symptoms, or progression, of the disease,” Rothstein says. “And at last, we’re about to get the tools to investigate if subtypes of patients exist.” New stem cell techniques are making possible the first cultures of nervous system cells from living humans with ALS. Rothstein and colleagues hope to use such cultures to pick out who might benefit most from a particular drug like talampanel.

“We’re optimistic about ALS research,” he says, “in a way we haven’t been before.”