Before I could utter a word, she calmly said, "It's ok, Dr. Munoz. We'll figure out a way to get through this together." 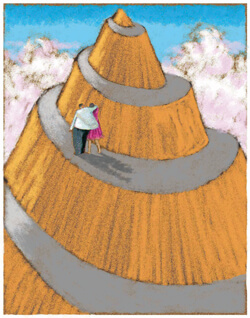 Throughout medical training variety and consistency have seemed opposing values.

Variety is done well. As medical students on the wards, we drink from the fire hose in four- to eight-week gulps. Surgery, Internal Medicine, Pediatrics, Psychiatry, Emergency Medicine. We try to sample everything, while rarely mastering anything. But clinical hodgepodge is the point, I suppose, as we try to choose career paths.

Consistency is harder to achieve. Just when you think you’re understanding kids, you move on to adults. Once you can hold the scalpel, you trade it for the stethoscope.

This year, as an assistant chief of service in the Department of Medicine, I have had the opportunity to attend on more than 1,000 cases. And in doing so, I’ve managed to enjoy that which has been elusive, even during a more focused Osler residency: simultaneous variety and consistency.

Ms. H’s story started long before I first met her. In 1986, my biggest trauma was moving from Boston to Baltimore in the middle of the 2nd grade. That same year, Ms. H suffered a sudden cardiac arrest, and lived to tell about it, leaving Hopkins with an implanted defibrillator. In 1994, my high school basketball team beat our perennial cross-town rival in double overtime. Ms. H beat throat cancer. In 2000, I barely passed my first anatomy exam in medical school. Ms. H beat breast cancer. In 2005, I landed a spot in the Osler Residency. Ms. H beat lymphoma, and survived open-heart surgery to repair a tear in her aorta.

I met her this past July, the first of her many hospitalizations I have overseen for congestive heart failure. Chemotherapy, radiation, and the years have taken a toll on Ms. H’s heart muscle. Her weak heart causes her to easily retain fluid, despite good medicines and her genuine attempts to avoid salt. With every visit to the hospital, her first words are the same: “Doc, I can’t breathe.”

A few days of intravenous diuretics usually does the trick. The excess fluid in her legs, abdomen, and lungs (the cause of her breathing difficulty) comes out, thanks to her kidneys’ response to our medicines. When she can walk the Halsted 8 hallway without tiring, she goes home. And we wait.

Part of her success in making it to age 67 has been access to world-class healthcare around the corner from her East Baltimore row house. But part of her success is unquestionably due to her spirit. She is deeply religious, but not aggressively so. She has the patience of Job, but is not passive, assertively inquiring about the medical plan and her progress on a daily basis when hospitalized. And she has the best laugh east of the Mississippi River. While I don’t like that sickness brings her to the hospital, seeing her name on the office board is quietly warming because she is such a pleasure of a person who, over the year, I’ve grown to love.

For a few days in early April, her laughter stopped.

After she was admitted again for shortness of breath, we discovered a new problem. An X-ray revealed a big pocket of fluid surrounding her left lung, which was causing partial collapse of the lung—and taking away her breath. In standard sterile fashion, we inserted a needle at the bedside and removed over a liter of fluid. Relief, albeit temporary. Three days later, she again felt miserable. This time, after consulting with our surgeons, we sent her to the operating room for a more definitive procedure to drain the fluid. Her weak heart made it a far from casual undertaking. After surgery, she spent three days in the ICU, awake but on the ventilator. My sigh of relief when she made it back to my service may have trumped hers.

Relief, for both of us, was again temporary. Four days later, the fluid was back.  While a clinical setback in any patient disappoints me, I confess that it hurts a little more with Ms. H. Now, facing uncertain prospects for how to get her better, I sat at the end of her hospital bed. Before I could utter a word, she calmly said, “It’s OK, Dr. Munoz. We’ll figure out a way to get through this together.”

For me, it seems clear what sustained her faith in my team—through what has been an unambiguous failure on our part to keep her left lung space from filling with fluid. It is not our superior medical skills, nor has it been the effectiveness with which we have achieved a desired outcome. What has sustained her faith in us can be summarized in a word: consistency. We have consistently been her doctors this year; in good times, and now in bad. We have earned her trust over months of fighting off her symptoms. She’s a smart enough woman to recognize our current clinical failure, but a faithful enough woman to recognize our investment in her. That faith was built not in a single moment but rather in an accumulation of moments measured in months.

I hope that faith continues to provide us more time to search for a solution. I miss her laughter, and want nothing more than to hear it again. And when I do hear it, we’ll both breathe a little easier.