Rare but deadly, ALM has a new enemy at Johns Hopkins. 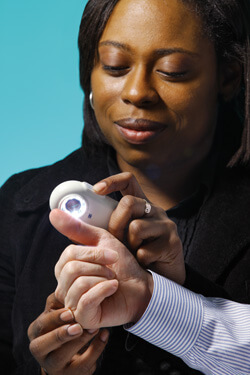 Hinds examines a patient’s nail bed, where ALM can first be detected.

Ginette Hinds is on a mission. She and other dermatologists have been tracking a little-known skin cancer for some years now, and Hinds thinks it’s high time to drag the culprit out of the shadows in a bid to reduce its destructions.

Though acral lentiginous melanoma is rare, says Hinds, too few of the people most prone to it know what to look for. Unlike most melanomas, she explains, ALM is the most common form of melanoma in ethnic groups with an abundance of melanocytes—African Americans, Asians, Pacific Islanders, and Hispanics—groups conditioned to feel at very low risk for skin cancers.

On top of that, says Hinds, ALM arises in body areas not normally associated with skin cancer, such as the palms, nail beds, and soles of the feet.

Few medical scientists study the condition, reports Hinds, which could contribute to its low profile. She consistently detects “surprise” when she alerts the key ethnic groups to their special risks. “They thought melanoma affected people with fair skin only,” she says. The chronically low awareness helped propel Hinds’ appointment here last August to a post as the director of Hopkins’ Ethnic Skin Program.

Though ALM accounts for less than 3 percent of all melanomas, says Hinds, it’s too often discovered too late for effective treatment. This can make it surprisingly deadly. Just in the African American population, she says, up to one in four patients with ALM will die within five years. The statistics are even worse for Asians and Pacific Islanders, where ALM mortality rates are closer to 50 percent.

“ALM may be uncommon,” says Hinds, “but the prognosis is so dismal that it is very important to diagnose and treat it early.”

To amplify her larger cause, Hinds and other members of her department have launched community outreach efforts. After explaining the risks for ethnic groups, Hinds also spells out the early warning signs. One of the strongest indicators, she says, can typically begin as a seemingly innocuous sliver of pigment on the nail bed (called melanonychia). “A lot of people have this and ignore it,” says Hinds. “They are normal in up to 75 percent of adult African Americans, so they wouldn’t seek treatment for this. It is a normal variant, but it should be followed by a dermatologist.”

These otherwise common lesions should send alarms, says Hinds, “when the pigment sliver starts getting darker, increasing in width or extending from the nail onto the nail-fold. That’s an ominous sign.”

Famed reggae artist Bob Marley may have initially dismissed the melanonychia that showed up on one of his nail beds, thinking it to be a small bruise picked up in a soccer game. It turned out to be ALM, which eventually took his life in 1981.

Hinds says early intervention might have changed that outcome. As with many other skin cancers, the lesions can be most easily excised when they’re still small. More advanced lesions can involve the removal of a diseased digit or even entire limb, often followed by chemotherapy.