Beloved former dean of students touched the lives of generations. 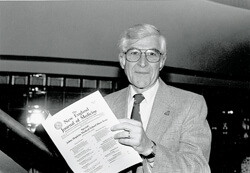 Last fall, the committee overseeing the placement of art in the new Anne and Mike Armstrong Medical Education Building received a 15-page petition of tributes from a group of alumni, faculty and current students, all lauding Henry Seidel ’46.  They wanted a portrait of Seidel, then languishing in the Pre-clinical Teaching Building, moved to a more prominent location in the Armstrong Building, set to be dedicated on October 24.

Among those urging the move was Donna Magid ’79, associate professor of radiology and orthopedic surgery. She wrote, “There could be no more fitting tribute, nor reassuring visual, than to encounter Dr. Seidel’s greatly beloved face and presence every time we enter the new Armstrong Building. For years he personified the best of the best in Hopkins education; may his standards and style never be forgotten.”

The depth of admiration and affection expressed in Magid’s tribute, along with the equally eloquent paeans penned by 34 others—ranging from physicians who had known Seidel for half a century to a current second-year medical student—powerfully demonstrated that his impact on generations of Hopkins students and colleagues is likely to be long remembered.

Seidel, professor emeritus of pediatrics and dean of students in the School of Medicine from 1968 to 1971 and again from 1977 to 1990, died on March 24 at his home in Columbia, Md., of complications from lymphoma. He was 87.

“I hope to one day give back to future trainees what Dr. Seidel has graciously given to me,” wrote Barry Solomon, assistant professor and director of the Harriet Lane Clinic. Solomon was one of the co-editors with Seidel of the seventh edition of Mosby’s Guide to Physical Examination, which was published the week Seidel died.

Several petitioners called Seidel “a gentle giant,” while Robert Brooks ’82 wrote of his mentor, “In every life we are honored by rare individuals whose force of personality cannot be captured by the best of art, yet who in their turn paint on the canvas of our lives strong, indelible brushstrokes.”

Seidel’s portrait, rendered in brushstrokes both strong and gentle, indeed was moved to the new Armstrong Building. He saw it there on the day of the building’s dedication last fall.   Neil A. Grauer