Archives - Getting in While the Getting is Good

Getting in While the Getting is Good 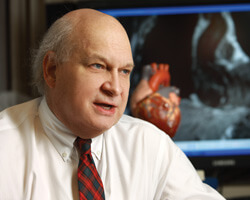 It’s the surgical equivalent of a two-fer: If surgeons need to open a patient’s chest for, say, a valve repair, why not also address a troublesome arrhythmia at the same time?

Such thinking has lately turned into a near daily occurrence at Johns Hopkins, where heart surgeons now routinely team up with cardiologists to solve complex issues before patients leave the operating room. Chief cardiac  surgeon Duke Cameron says the approach is especially natural for patients with atrial fibrillation.

In many cases, Cameron explains, Hopkins electrophysiologists can tackle A-fib with a minimally invasive technique in the cardiac catheterization lab. The procedure typically takes up to four hours, says Cameron, and the cases can be especially challenging in that cardiologists can’t easily track their progress.

Now, says Cameron, heart teams collaborate when patients have combined conditions. In cases where surgeons are repairing hearts in open-chest procedures, they can add an enhanced A-fib repair while the tissues are fully exposed. “We have the advantage of being able to see exactly what needs to be done,” says Cameron. “All of us can do it now, and it’s really quick—like 10 minutes.”

The A-fib repair favored by Hopkins teams is the modified Cox Maze procedure. It’s based on the successful development of a novel approach to the problem first devised 20 years ago by Duke University cardiologist James Cox. Cox deployed a series of shallow surgical incisions in the heart tissue’s outer surface, aimed at funneling the heart’s natural electrical pulses into a more organized pattern from the atria to the lower heart.

Though that technique was generally effective, cardiac device-makers have produced tools that cause less trauma to the heart tissue than a series of incisions. European doctors led the way in using the pen-like probes that could either freeze or burn the areas of misfiring surface tissue that cause A-fib. “It doesn’t matter whether you cook it or freeze it,” Cameron says. “If the tissue’s dead, you can interfere with these electrical pulses” in a therapeutic way. The speed and efficacy of this add-on approach gave it traction, says Cameron. “It’s really caught on.”

The Hopkins system gets a special benefit from a group of 10 cardiac electrophysiologists whom Cameron describes as “among the best in the world.” That group is led by arrhythmia expert Hugh Calkins, with each member well-versed in guiding the surgeons through the nuances of how to shape the optimal electrical paths in cardiac surface tissue.

Hopkins surgical heart teams now do about 300 such ablation add-ons every year, says Cameron, successfully stopping A-fib in more than 80 percent of the patients treated.