And in one tailored case, an innovative adaptation. 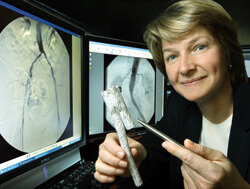 Though Nancy Harthun had seen challenging endovascular cases, this one was a doozy. The patient initially presented to the Emergency Department with pneumonia. But during workup, some alarming findings came to the fore: In the region of the patient’s abdomen just below the kidneys, a ballooning aneurysm posed a deadly threat.

Harthun knew many such aneurysms are only discovered after they’ve already ruptured, too often resulting in death even before the patient makes it to the hospital. But other details in this case made matters worse. The patient had been a lifelong smoker and was now over 70. There was even a troubling blockage below the aneurysm that restricted blood flow to the patient’s right leg, along with an extended portion of diseased artery that compromised flow to the left leg.

And, to make things even more difficult, the patient was a woman. “Women’s aneurysms are different,” says Harthun, an accomplished endovascular surgeon who logged hundreds of repairs of abdominal aortic aneurysms (AAA) before signing on with Johns Hopkins last year.  Not only are her female AAA patients typically much older—more likely in their 90s than male patients, who are more likely in their 60s—their vessels are also typically smaller than most repair devices can accommodate.

Though 45,000 people will die from AAA complications in the United States this year, says Harthun, only one in four of them will be women. This partially explains why device-makers have targeted the prevailingly larger vessels of male patients. But Harthun says that when the condition does afflict women, it’s equally deadly: It’s the 20th leading killer of women.

The difficulty associated with women’s AAA cases too often prompts vascular surgeons to steer away from minimally invasive procedures, says Harthun, but this needn’t always be so. The open AAA surgeries are an especially taxing procedure, she says, and the minimally invasive approaches bring a slightly higher success rate, up to 99 percent versus 95 percent.

Harthun has found ways to finesse the narrower twists and turns of women’s abdominal arteries. “There are a lot of ways around having arteries that are too small,” she says. “You can do some adjunctive maneuvers to use a less invasive device.”

Her 70-something smoking patient, for whom she devised three innovations, provides a good example.

In most AAA cases, Harthun would deploy a standard Y-shaped fabric-covered stent into the aneurysm sac, extending its two branching elements into the iliac arteries that naturally divide in the lower belly. In this case, Harthun had to devise three innovations.

First, she had to fit a stent into the patient’s femininely smaller iliac artery just on the one side, closing off the right leg’s feeding iliac while planning a separate way to vascularize that leg. Second, she had to craft an extra length of fabric-covered stent to bypass the diseased—and even narrower—left iliac, ensuring good flow to the left leg. Third, Harthun had to find a way to extend blood flow back into the right leg, the iliac to which had been closed off. To do this, Harthun crafted another portion of artificial vessel. This one would extend flow from a section of the restored left artery—now the femoral vessel—across the patient’s lower belly to the opposing femoral artery. She calls this a “fem-fem crossover graft.”

The adventurous procedure worked beautifully, says Harthun. The woman’s aneurysm was sealed off, her flow was restored, and she even enjoyed the benefits of a minimally invasive procedure, including a quick recovery time. She was home within three days. Even five years after the procedure, the patient reported no ill effects.

Such cases demonstrate many of the strides her field has made recently, including intra-operative imaging guidance to ensure more accurate placement of devices and improvements in fabrics and other adaptations to reduce the risk of graft migration after placement.