Archives - Setting the Course in Malaysia

Setting the Course in Malaysia 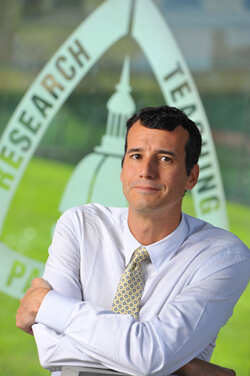 Back in Baltimore: Sosnay found it hard to say goodbye to the people at Perdana.

After two years in Malaysia, Hopkins pulmonologist Patrick Sosnay found it difficult to say goodbye to students and faculty at Perdana University Graduate School of Medicine (PUGSOM) and return to Baltimore in August. But he left knowing that medical students there are well-prepared to continue their academic journey with Hopkins’ Genes to Society (GTS) curriculum.

In a nation where most medical schools take a hierarchical and often narrowly vocational approach to medical education, the curriculum surprised and sometimes overwhelmed, says Sosnay, who was dispatched to the fledgling medical school as GTS course director in 2011. A year earlier, Johns Hopkins Medicine had signed its historic agreement to help create Malaysia’s first four-year graduate medical program, as well as to design Perdana University Hospital—a 600-bed teaching hospital—and research programs across the medical enterprise.

“Students [at Perdana] are not used to being considered colleagues of the faculty,” notes the pulmonologist. “They are also unfamiliar with the Socratic method of teaching. Especially in small groups, we want to hear what they are thinking, but they’re concerned that they’ll give a wrong answer.”

Those discomforts are exacerbated by language differences. Though students’ English sufficed for everyday conversation, for some it didn’t facilitate the kind of nuanced arguments that faculty encouraged.

Throughout his two-year tenure, Sosnay saw all of these problems diminish. But even from the start, he says, any challenges were easy to overlook because of the students themselves. Their infectious hunger for knowledge, and exhaustive pursuit of success, led him (and visiting faculty) to revel in teaching them.

“One faculty member told me, ‘Oh, my God, we’re taking your students home!’” he says.

The Malaysian students’ devotion, Sosnay observes, is a function of many factors: a cultural emphasis on the high value of education, the responsibility they feel to the government that sponsors the majority of them, and the value the students themselves place on being considered colleagues of the faculty that instruct them.

“They feel like, ‘We know everyone’s going to be looking at this and we want to make you guys, and the school, look good.’ It’s pretty humbling for me,” says Sosnay.

As course director, Sosnay oversaw the numerous visiting Hopkins faculty members who flew in to provide system-specific expertise. What 20 to 30 people might teach at Hopkins in Baltimore, only two to three teach at Perdana. As a result, he says, “everyone does a little bit more.” He fortified his own lectures by speaking on topics as varied as ethics, clinical skills, anatomy, and genetics.

Sosnay will most miss his colleagues (students and faculty) and friends. But he’s also not short on praise for the place he called home for two years. “I brought my parents out from Wisconsin—the extent of their previous international travel was Cancun and Niagara Falls,” he says. “I think it was neat for them to see how comfortable it is in Malaysia.”  Cymantha Governs