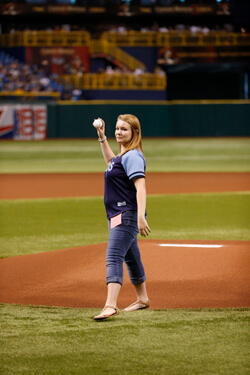 1 2
After recovering from a large blood clot, Angela Sanborn threw out the ceremonial first pitch at a Tampa Bay Rays game. She shared her blood samples to help advance thrombosis research.

Last spring, when 16-year-old Angela Sanborn began to feel pain shoot through her groin, doctors attributed it to muscle strains from her regular gym workouts. But as the pain intensified and her leg swelled and turned purple, the Florida teenager was sent to All Children’s Hospital in St. Petersburg, a member of the Johns Hopkins Health System. Doctors there detected and successfully treated a blood clot, aka deep vein thrombosis, which extended from the deep veins of Angela’s calf to the inferior vena cava in her abdomen.

A few weeks later, when she returned to All Children’s for a follow-up visit, Sanborn discovered that her experience could wind up helping others. By providing blood and fluid samples for future biomarker studies, she might aid researchers in unlocking clues about the most effective ways to treat deep vein thrombosis. Neil Goldenberg, her doctor and director of research at All Children’s, couldn’t have been more pleased by Sanborn’s offer to serve as a donor.

Ushering in a new era of personalized medicine, biomarker research focuses on matching the unique genetic characteristics present in blood, saliva, urine, cells, and tissue with the best available treatments. Johns Hopkins Medicine is at the forefront of these efforts, accumulating samples from patients who want to help further research.

Sanborn was the first patient to volunteer for one of Goldenberg’s large studies that span All Children’s in St. Petersburg and Hopkins Hospital in East Baltimore. His studies include investigations not only on thrombosis but on a host of other childhood diseases, and her donation is among the first specimens stored in All Children’s new, state-of-the-art biorepository. There, human tissue, blood, and other biological samples are preserved and safeguarded until ready for analysis.

Across the nation, hospitals are building such storage facilities to corral millions of biosamples, maintain uniform storage standards in cryofreezers, and sustain the samples’ integrity so they will remain viable for decades, notes Margaret “Sue” Penno, who has directed the Genetic Resources biorepository at Hopkins Hospital for the past 25 years. Currently she is also serving as interim director of All Children’s Hospital’s repository.

“The goal,” she says, “is always focused on the patient—to put a sample away securely for a time when we know more, so [patients] might benefit from future research.”

At Johns Hopkins, the quest to collect and store samples in a secure place began in 1989. Now Hopkins researchers are able to tap into hundreds of thousands of samples for cohort studies involving groups of people with common characteristics—who suffer from illnesses ranging from sickle cell disease to colon cancer. The biorepository on Blalock 10, which offers rapid retrieval from 12 large-capacity freezers, currently supports approximately 250 IRB-approved Johns Hopkins investigations and several dozen outside investigators.

Penno, a seasoned research scientist inspired by genetics legend Victor McKusick ’46, has spent the past three decades investigating how cells move, clump together, and divide in her studies of tumor cell metastasis and other pathologies. In the quarter-century since the biorepository opened on Blalock, Penno has tapped into the specimens for her own research, while also gaining insight into the science of specimen storage. Over the past four years, she and others on the Dean’s Biospecimen Task Force have been calculating how best to safeguard every aspect of biospecimen storage at Johns Hopkins.

Penno says her task is “like running a 24/7 day care center.” And just as each child is individual, various specimens require different temperatures and types of freezers, made safe by elaborate software and alarm systems. There’s a plan in place to keep samples safe from hurricanes, power outages, fires, or floods, such as occurred last fall at the Cancer Research Building in the aftermath of Hurricane Sandy.

This year, the Genetic Resources Core Facility (GRCF) Biorepository in Blalock was among the first to be recognized as a College of American Pathologists-accredited facility, offering superior services in cryopreservation, cryostorage, bioshipping, and bioprocessing. Penno and Melissa Olson, the facility’s new director, are working hard to achieve the highest possible standards. “We are proud to join the 20 or so laboratories worldwide that have received this accreditation,” says Olson. “It defines our commitment to offering the highest-quality standards for investigators.”

While pleased with the new accreditation honor for the Hopkins Hospital facility, Penno is also impressed with the progress on All Children’s biorepository—and with its research pipeline: 23 cohort studies are currently underway in neonatology, oncology, cardiology/cardiovascular surgery, and neuroscience. In one oncology study, for example, researchers are preserving specimens from tumors to examine the proteins in the DNA or RNA and test drugs that might prove effective.

Goldenberg, who directs All Children’s clinical and translational research as well as Hopkins Medicine’s pediatric thrombosis program, calls this a “momentous time” in the development of biorepositories. Pooling resources, he explains, helps researchers address a number of questions in the most efficient way and find key predictors of outcomes.

Penno currently travels to the Florida hospital every two weeks to chart the development of the new repository, a gleaming facility that uses robots to store samples, providing one more layer of protection against human contamination. All Children’s, Penno believes, is poised to become a premier pediatric academic program as it continues to recruit high-caliber scientists.

For Penno, one of the highlights of her regular trips to Florida is just riding the pediatric elevators. “As someone who never treats patients, I think it’s cool to see all these little kids. You never forget what you’re working toward,” she says.

Donations like Angela Sanborn’s, she adds, will drive research and help solve mysteries. “I think you can feel confident that there’s hope.” She pauses, then reiterates, “…so much hope.”