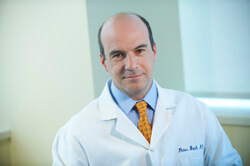 Empowering patients and finding ways to control skyrocketing medical costs are focal points for Peter Bach (HS, 1992–95; fellow, pulmonary and critcal care medicine, 1997–98), who directs the Center for Health Policy and Outcomes at the Sloan-Kettering Cancer Center in New York.

Bach, who is a full member with tenure at both the Cornell Medical School and at Memorial Sloan-Kettering, lately has been examining the important question of who would most benefit from CT screening for lung cancer, the leading cause of cancer deaths in the United States.

“By the time we diagnose most people with lung cancer today, the disease is in advanced stages, cannot be removed through surgery, and is difficult to cure,” Bach notes. While CT scanning can be a valuable diagnostic tool, it is expensive and carries health risks. “[So] we are trying to develop policy-oriented models of who should be screened,” he says.

He and his colleagues developed statistical prediction models that pinpointed a population of heavy smokers (estimated at 8 million Americans) who would see a 20 percent reduction in lung cancer death with regular screenings. Those who don’t fall into this group have a much lower chance of developing lung cancer, so screening might do more harm than good. Based on these findings, which appeared in the May 20 Journal of the American Medical Association, the American College of Chest Physicians and the American Society for Clinical Oncology have published new screening guidelines.

The larger issue, Bach believes, is giving patients the information they need to make rational choices. “The days of doctors telling patients what to do, even when it's not really clear for that patient that the risks are worth the benefits, are hopefully over,” says Bach, whose popular health blog in the New York Times earned avid followers.

It was at Johns Hopkins, where Bach was a member of the Osler Medicine house staff and later a fellow in pulmonary and critical care medicine, that Bach says he learned that taking care of the patient is the most important thing. “I still, to the irritation of my colleagues, refer to Hopkins as the place I learned to be a doctor,”  he says.  KN