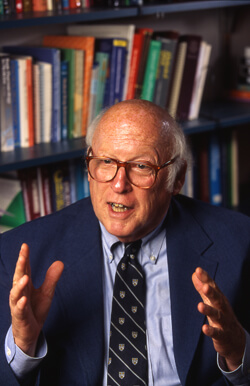 Lietman, a specialist in bacterial and viral infections and world-renowned for pioneering antiviral treatments—including drugs for patients infected with herpes simplex virus and HIV—was the longtime chief of the Division of Clinical Pharmacology. He spent more than three decades as an influential teacher and mentor for Hopkins medical students and scientists, both in Baltimore and abroad.

After making what turned out to be his last overseas trip to London last March, Lietman died at his Baltimore home on April 20 of congestive heart failure. He was 79.

Serving from 1972 to 2001 as head of the clinical pharmacy division, which is part of the Department of Medicine and the Department of Pharmacology and Molecular Sciences, Lietman also held an appointment in the Department of Pediatrics. His skills behind the lectern earned him the unusual distinction of receiving faculty awards from medical students in both the basic sciences and clinical fields. He held the Wellcome Professorship of Clinical Pharmacology from 1980 to 1998 and was instrumental in the creation of a number of innovative research groups and initiatives.

“He was a gifted educator and was beloved by generations of Hopkins Medical students,” said Myron “Mike” Weisfeldt ’65, chairman of the Department of Medicine.

When Hopkins launched its Johns Hopkins Singapore research and medical care operation in 1998, Lietman was named the founding director of research and education there.  From scratch, he created eight basic research laboratories and five other projects. As director of academic relations for Johns Hopkins Medicine International, he led the successful effort to resurrect a historic academic relationship between Hopkins and the medical faculty of the American University of Beirut in Lebanon. He also led the efforts to establish collaboration between Hopkins and the Children’s Hospital of Fudan University in Shanghai and the University of Trinidad and Tobago in Trinidad and Tobago.

But for brief stints at the Hospital for Sick Children on Great Ormond Street in London, and at the National Institutes of Health, he spent most of his 51-year career at Hopkins, retiring in 2010.