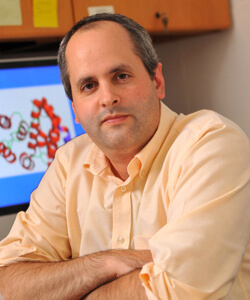 Diversity in “scientific subjects, settings, and researchers” will be a theme, Lorsch says.

Shortly after Jon Lorsch (faculty, biophysics and biophysical chemistry, 1999–2013) was named director of the National Institute of General Medical Sciences (NIGMS), he was flabbergasted by how many congratulatory emails he received.

He shouldn’t have been. NIGMS appropriately is known as “the center of the center” of the National Institutes of Health—this nation’s, and the world’s, largest source of funding for medical research. With an annual budget of $2.4 billion, the NIGMS is the primary federal funder for basic research in cell biology, biophysics, genetics, developmental biology, pharmacology, physiology, biological chemistry, biomedical technology, bioinformatics, and computational biology.

Lorsch, 44, earned his PhD in biochemistry at Harvard, working first with the legendary enzymologist Jeremy Knowles and then with biologist Jack Szostak. Szostak shared the 2009 Nobel Prize with Hopkins’ Carol Greider and Elizabeth Blackburn of the University of California, San Francisco, for their discoveries about the role played by the enzyme telomerase, which helps preserve the ends of a cell’s chromosomes when it divides.

At Hopkins, Lorsch and his laboratory’s researchers have made significant discoveries in their studies of the mechanism by which molecular machines locate the beginning of the protein-coding region of an RNA molecule, called “translation initiation.” His group, in close collaboration with the National Institute of Child Health and Human Development, created a fully reconstituted yeast translation initiation system and used it to dissect the molecular mechanisms of each stage of the process. Lorsch will bring a small lab with him to NIH and continue to collaborate on this work with intramural researchers, he says.

Outside of the lab, Lorsch has been an eloquent advocate for science education reform in graduate and medical curricula. During his years at Hopkins he served as director of admissions for the graduate program in molecular biophysics, and headed the Scientific Foundations of Medicine class for first-year medical students, and the research elective for medical students. He also chaired the MA/PhD committee that oversees graduate education in the School of Medicine.

His experiences at Hopkins will undoubtedly inform related efforts at the NIH, where diversity in “scientific subjects, settings, and researchers” will be a theme, he told the American Association for the Advancement of Science’s ScienceInsider, adding, “If we can ensure that we have the most effective ways to distribute funding, it will be for the good of the nation and scientists.”  Neil A. Grauer